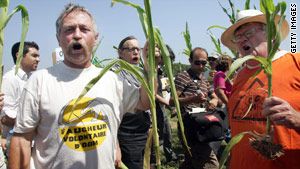 Before dawn Sunday, about 70 masked activists associated with the European protest movement Faucheurs Volontaires -- or Voluntary Reapers -- pulled 70 experimental grape vines by their roots and chopped them to pieces, said Jean Masson, president of the National Agricultural Research Institute, or INRA, in eastern France.

He estimated the total damage at 1 million euros ($1.28 million).

Police detained about 60 people, questioned them and then released them pending charges.

The vines were part of a transgenic experiment to develop disease-resistant plants at the INRA research station and had been attacked once before by a lone activist.

In a communique, the Faucheurs Volontaires said the grape vines were "neutralized" because "this experimental field was a first step toward imposing this type of agriculture, which is currently forbidden."

The communique was referring to the experimental development of genetically modified organisms.

The group, which has branches throughout France and Germany, has destroyed genetically modified corn in many regions.

Masson told CNN the vines were growing in soil that contains the disease they were studying and therefore cannot be used to plant new root stocks.

He said he hopes the attackers will be taken to court as soon as possible.

Masson said the vines would not have been sold and the government-supported institute is "based on pure research."

The attack was condemned by the ministers of Ecology, Research and Agriculture who said in a joint communique that they were "shocked by this act of scandalous degradation."

The French Farm Federation also condemned the destruction of the vines as a blow to French public-sector research and particularly to high-level genetic research.

The federation noted that French vineyards are concerned over the deadly plant virus called court-noue, which INRA was researching and for which there is no known remedy.