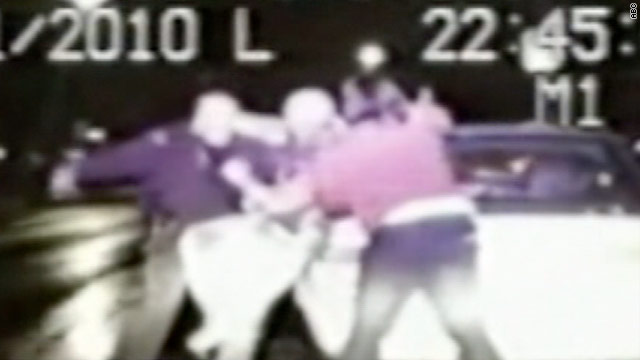 (CNN) -- When she saw a Dayton, Ohio, police officer tangled up with a man, Angela Pierce could have kept on driving. Instead, she got out of the car to team up with the officer and join the fight.

While the danger was real -- especially with the suspect in arm's reach of the officer's gun -- Pierce told HLN's Jane Velez-Mitchell that her thought process Saturday night was simple: The police officer needed help, and she was in a position to give it.

A camera mounted to the officer's car showed the police officer -- identified by CNN affiliate WHIO as Officer Jonathan Seiter -- pulling over 64-year-old Otto Coleman on what appeared to be a routine traffic stop. But then Coleman attacked the officer, leading to a full-on scuffle.

"It was hands on, and it was a boxing match," Seiter told WHIO.

Around that time, Pierce said she was driving by with her aunt, heading to a birthday party. She asked her aunt to pull over, then got out of the car and ran toward the scene to help. For less than a minute, Pierce pounded Coleman repeatedly on his head to help subdue him until more help arrived.

"That could have been my father or grandfather," Pierce said of her decision to help Seiter. "I just kept on swinging, because I didn't want (Coleman) to get me or anything."

Pierce said that police initially handcuffed her, before soon realizing her part in the battle and releasing her. Subsequently, with Coleman by then under arrest, she and the other police officers exchanged high fives before she headed off to her party.

Dayton police Sgt. Larry Tolpin warned that people could get seriously hurt when they jump into the fray -- even if it's on law enforcement's side. Still, he told CNN affiliate WDTN that Pierce deserved thanks for her effort.

"Don't get me wrong, I'm not endorsing that citizens participate in this manner," Tolpin said. "But under this particular circumstance, it was very commendable of her."