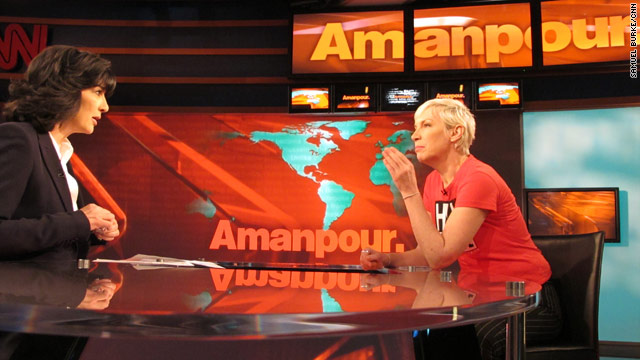 Annie Lennox: "This has been a killer for years and it's not getting any better."
STORY HIGHLIGHTS

(CNN) -- Singer and activist Annie Lennox wants the world to know that the HIV virus and the debilitating condition it causes, AIDS, are the leading killers of women of reproductive age in the world.

"The world needs to wake up and realize that the HIV/AIDS pandemic has changed its face since the 1980s. It has been affecting women and children at an enormous rate," Lennox told CNN's Christiane Amanpour in an interview aired Friday.

"As a woman and a mother myself, I want to contribute to keeping this issue on the table. HIV is invisible," she added.

"You have swine flu, you have bird flu, and everybody is up in arms. But this has been a killer for years and it's not getting any better."

Lennox this month went to the United Nations headquarters in New York to help launch a five-year action plan to provide recommendations on how to address the disproportionate impact of HIV/AIDS on women and girls worldwide.

Health officials acknowledge that great strides have been made addressing HIV/AIDS as a whole. But they say when it comes to women and girls, the world has made little progress.

Lennox said her intention is not to shock, but to break stigmas on the subject, by using the power of her music.

"Music is a great vehicle for communications, and I have a certain platform. I have an opportunity and I have to take it," she said. "As a woman, and as a mother and as an artist, it's something that I feel compelled to do. Otherwise it would be a complete waste."

Lennox said she has been very focused on this issue since she heard former South African President Nelson Mandela describe HIV/AIDS as "genocide" in 2003.

"To hear Mandela describe the HIV pandemic as a genocide really almost knocked me off my chair," she said.

"You know in South Africa, post-apartheid, one in every three pregnant women is carrying HIV. That is hugely significant. If they don't have intervention, the baby will be born with the virus. That baby will probably last, maybe a year."

Lennox added that a woman is raped every minute in South Africa, a country that is believed to have more people infected with HIV/AIDS than any other nation.

"You're seeing women especially, and young girls and young children, right at the front of the devastation. And it breaks my heart."

Asked whether she thinks the next generation will take up the HIV/AIDS issue as energetically as she has, Lennox said, "Unless people campaign in civil society, unless governments and leaderships campaign and keep the issue on the table, it's very hard to say."