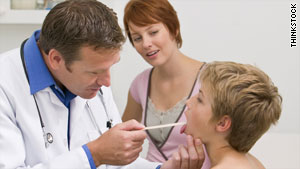 Dependent children can stay on their parents' insurance policies until age 26, according to the reform.
STORY HIGHLIGHTS

(CNN) -- What? Really? You don't understand the new health care reform legislation? You find yourself confused? If you haven't mastered the minutiae on all 2,309 pages of the health care reform bill signed earlier this week by President Obama, there's nothing wrong with you -- even experts are having a hard time getting a grip on all the details.

So we've done the work for you. If you're going to take away just five things from the new legislation, here they are. If you manage to comprehend these five, give yourself an A+.

If you're adventurous and want to take a stab at reading the bill itself, here's the health care reform legislation. But, if like most people you find it incomprehensible, we've given you links to more easily digestible sources of information.

1. Health insurance companies can't discriminate against you because you have a pre-existing condition.

More than 13 million American non-elderly adults have been denied insurance specifically because of their medical conditions, according to the Commonwealth Fund, and the Kaiser Family Foundation says 21 percent of people who apply for health insurance on their own get turned down, charged a higher price or offered a plan that excludes coverage for their pre-existing condition.

Starting in 2014, the new health care reform legislation makes it illegal for any health insurance plan to use pre-existing conditions to exclude, limit or set unrealistic rates on the coverage an individual or dependent can receive.

In the meantime, if you have a pre-existing condition, starting in 90 days you should be able to join a national high-risk pool, according to Linda Blumberg, a senior fellow at the Urban Institute. She also recommends finding out whether your state has an existing state high-risk pool. Here is contact information for the 35 states that have high-risk pools from the National Association of State Comprehensive Health Insurance Plans.

2. Young people can remain on parents' insurance until age 26.

Currently in most states, dependents get booted off Mom and Dad's health insurance policy before their 26th birthday, sometimes as early as age 19. For the rules in your state, see this list from the Kaiser Family Foundation.

3. You could get a subsidy to buy insurance if you make less than $88,000 per year for a family of four.

How the health care bill could affect you
RELATED TOPICS

Starting in 2014, the health care reform bill provides subsidies for people who don't get insurance from their employers and therefore have to buy it on their own. The size of the subsidy depends on your income, whether you're single or have a family, your age, and where you live.

• A 40-year old individual making $30,000 a year in a medium-cost area of the country will get an $850 subsidy toward buying a policy, which should cost about $3,500, according to a Kaiser Family Foundation subsidy calculator.

You can estimate your own subsidy by using the Kaiser subsidy calculator.

4. If you don't get insurance from your employer, that might change.

Starting in 2014, if your company employs more than 50 people, it will be required to offer you a health plan that covers at least 60 percent of your overall health costs, or the company will be fined $750 per year per full-time worker. That fine could increase to $2,000 if the reconciliation act passes.

In the meantime, groups like Coverage for All, Ehealthinsurance and the Patient Advocate Foundation specialize in helping people find affordable insurance and free care. You can find links to resources including prescription assistance programs here.

5. The health care reform legislation has some benefits for senior citizens, but it might have some disadvantages as well.

The AARP, formerly known as the American Association of Retired Persons, says health care legislation does two important things for seniors: It gives people on Medicare new access to free preventive services such as screenings for cancer and diabetes. Also, by 2020 it will close the "doughnut hole," the gap in Part-D where Medicare stops paying once a senior has spent more than $2,830 on prescription drugs and resumes when the individual's out-of-pocket spending has reached about $4,550.

However, the Congressional Budget Office, in a letter to Senate Majority Leader Harry Reid, said the new legislation also presents some downsides. Spending for Medicare beneficiaries will increase 2 percent or less each year, instead of the annual 4 percent increase they received previously. Some analysts worry seniors may start to feel that difference in the future.

CNN's Elizabeth Cohen and John Bonifield contributed to this report.