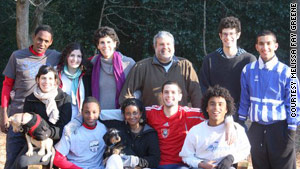 (CNN) -- Melissa Fay Greene woke up at night crying and wondering if she had "ruined our life."

Long before her decision to adopt a boy from Bulgaria, she learned that raising an adopted child could be challenging. It wasn't going to be a fairy tale to raise a child who had spent most of his life in an orphanage.

"It's terrifying," Greene said. "It's like meeting the man or woman you're marrying at the altar. There's no turning back. It's a lifelong commitment. It's really scary."

After she and her husband brought Jesse, 4, home to Atlanta, Georgia, she lamented the decision. The boy immediately latched onto Greene, never allowing her to disappear from his sight. He threw temper tantrums when she wasn't in his line of vision and once tried to run through a glass door to stop her from leaving the house. It wasn't the boy's fault, Greene said. But she felt depressed and overwhelmed just the same.

Children who are adopted may be at elevated risk for mental health disorders, such as attention-deficit/hyperactivity, oppositional defiance, major depression and separation anxiety disorders, according to a wide body of research. There's also evidence to suggest that children adopted internationally could have much higher rates of fetal alcohol syndrome, autism and brain damage, said Dr. Ronald Federici, a clinical neuropsychologist who works with adopted children.

In some cases, "the kids coming from the Eastern bloc and other countries, they've been languishing in deprived, neglected orphanages without proper care or education. So they come here with years of institutional damage -- alcohol, drug exposure, developmental delays, neglect, abandonment and all these issues that were never treated there," he said.

The longer a child has been institutionalized increases the potential for behavioral and other problems, Federici said. If a child is adopted earlier in his or her life, this reduces some of the risks.

But some adopted children can exhibit disturbing behavior -- as in a case described by a Tennessee family. They sent their 7-year-old adopted son back to Russia alone because of what they described as his violent behavior. The family's action has been widely criticized and triggered an international dispute, with Russia threatening to end adoptions to the United States.

The boy, Justin Artyem, compiled a hit list, threatened to kill his adoptive American mom for her house and tried to start a fire in the home, his adoptive grandmother said.

In such cases, families discover their adopted children have psychological issues and can feel overwhelmed by these needs.

"This is a well-known problem," said Dr. Robert Marion, chief of genetics and developmental medicine at the Children's Hospital in Montefiore, New York. "These kids are in orphanages because they were taken away from their parents or the parents couldn't take care of them. Many of them are born to parents who are alcoholics, drug users or have mental health problems."

Marion said he encountered a family a few weeks ago with an adopted child from Russia. The child did not want to go to school or participate in activities and threatened to burn the house, he said.

A 2008 study comparing about 500 adopted and nonadopted children found that the odds of having an ADHD or oppositional defiant disorder diagnosis were approximately twice as high in adoptees compared with nonadoptees.

"Families that adopt kids from Russia and elsewhere need to be prepared for the possibility that the child is going to come with problems like this or other problems," Marion said. "If that's the case, they need to know to ask for help and help needs to be available for them."

Parents sometimes don't know how to handle behavioral and psychological problems, he said. They may sue the adoption agency or abuse or relinquish their children.

Greene felt anxious about adopting her son in 1999. More than 10 years after the adoption, she looked back at her family life and said, "We've been infinitely enriched. We've been really lucky."

After the tumultuous first few months after adopting Jesse from Bulgaria, she reached out to her doctor and friends. Greene said she believes she had post-adoptive depression syndrome (which is like postpartum depression for adoptive parents) and now dispenses advice for parents who adopt.

Greene adopted four more children -- all are from Ethiopia and were orphaned after their parents died from complications of HIV/AIDS. In all, her family is made up of four biological and five adopted children -- large enough for a sports team. They all get along, but family life takes work, she said.

"It's misleading to think it's a pathway covered with rose petals," Greene said. "None of it is a Disney World ride, but it's wonderful. It's hard and serious work."