Can laughing give you a workout? 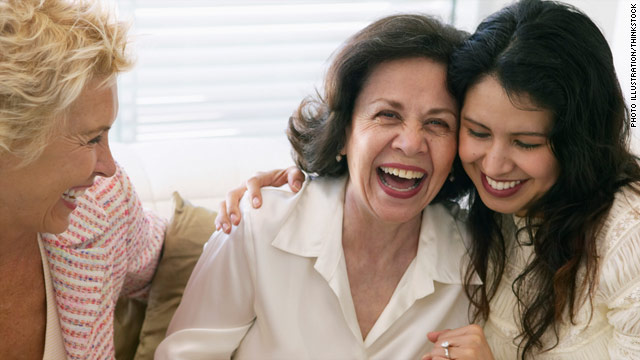 (CNN) -- Rolling on the floor laughing, giggling until your stomach hurts, guffawing and slapping your knees -- sometimes laughing can feel like a workout.

Since the concept of laughing for health surfaced in the 1970s, studies have indicated it can decrease cortisol and epinephrine (the hormones that regulate stress), help reduce blood vessel constriction and boost immune function.

One small new study takes that notion further by suggesting laughter could be as beneficial as exercise. But it's facing some skepticism.

The new research suggests repetitive laughter can affect hormones in the same way that exercise does. Dr. Lee Berk, a preventive care specialist and researcher at Loma Linda University, presented his findings this week at the 2010 Experimental Biology conference in Anaheim, California.

In the study, 14 volunteers had their blood pressures and blood samples taken before and after watching two videos -- one was the violent 20 minutes of the movie "Saving Private Ryan" and the other was a 20-minute clip from comedies or stand-up routines.

iReport: Tell us about your giggles for World Laughter Day

After watching the funny videos, the volunteers had changes in their hormones that regulate appetite. Like the mechanisms seen after exercise, the appetite-repressing hormone leptin decreased. Ghrelin, which makes people hungry, increased.

This doesn't mean that the volunteers became hungrier; instead, the effect struck "a good balance" between the two hormones, Berk said. After watching the violent video, the subjects showed no statistically significant change.

These initial findings do not mean a person can get healthy by skipping exercise and watching comedy on the couch.

"It's not rocket science that exercise is good for you," Berk said. "It adds years to your life."

When asked whether the effects of laughter are similar to exercise, she said. "That's too soon to say. I'd want a side-by-side study when they do so many different things."

Berk acknowledged the sample size of 14 is small. Major sources of research dollars such as the National Institutes of Health do not fund projects that examine issues such as laughter, so these studies tend to be smaller, he said.

"The reality is laughter is good for you," Berk said. "It makes us feel good. The dopamine is there. A merry heart is good medicine. There is plenty of other data to support that."

Dr. Michael Miller, director of the Center of Preventive Cardiology at the University of Maryland Medical Center, recommends laughter as part of a heart healthy program for patients.

"When you laugh for 15 minutes, the increase in the diameter of the blood vessel is similar to what you get when you run, jog or do aerobic-like activity," he said.

A 2005 study by Miller found that laughter caused the tissue in the inner lining of blood vessels, known as endothelium, to expand allowing more blood flow.

"It opens the blood vessel up and prevents platelets from clumping. It has a lot of heart-protective characteristics," he said.

Although the physiology of laughter is not well-understood, it has plenty of devotees, some of whom have started laughercise and laughter yoga classes. In these sessions, participants force themselves to laugh for health reasons.

Marilyn Galfin, who describes herself as a certified laughter leader and a professional clown, plans to start laughter classes in New York City for women who are trying to become active.

"When you're laughing, everything is moving," she said. "The internal organs are moving. You're getting things moving and starting to burn calories."

Galfin envisions participants in the class laughing, moving and playing children's games such as tag.

Children might not be such a bad example, said Miller.

"Kids laugh as much as 300 times a day; we do about 10 times less," he said. "True, kids laugh at everything. They don't deal with day-to-day stress, they're much more lighthearted. They don't take themselves too seriously."