For cancer survivors, yoga may boost energy and aid sleep 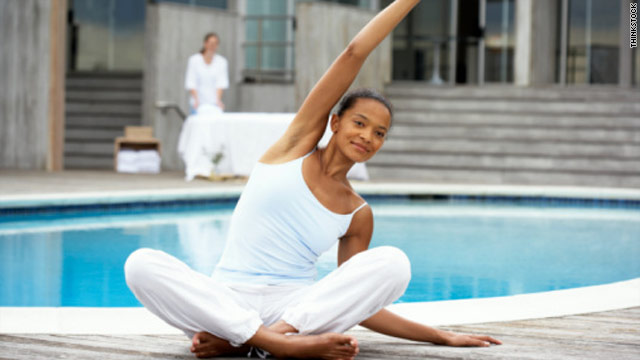 (Health.com) -- Cancer survivors often feel fatigued and have trouble sleeping for months -- or even years -- after their last chemotherapy or radiation session. Now, a new study shows that yoga can help them sleep better, feel more energized, and cut back on sleeping medications.

"We really wanted to find something useful, because right now there are not a lot of good treatments out there for fatigue," says the lead author of the study, Karen Mustian, an assistant professor of radiation oncology at the University of Rochester Medical Center, in Rochester, New York.

Compared with sleep medication, yoga "can be really empowering," says Suzanne Danhauer, a professor of psychosocial oncology at the Wake Forest University School of Medicine, in Winston-Salem, North Carolina. Sleep medications aren't always effective and can have side effects, and people who've just been through cancer treatment may not want to take any more drugs, adds Danhauer, who studies the benefits of yoga for cancer patients but didn't participate in the new study.

The study included 410 cancer survivors who had completed treatment in the previous two years and had been experiencing sleep problems for at least two months. All but 16 of the patients were women, and 75 percent were breast cancer survivors. In addition to the standard post-treatment care that everyone received, half of the study participants attended 75-minute yoga sessions twice a week for a month.

The sessions, which were based on two forms of low-intensity yoga known as Hatha yoga and restorative yoga, included breathing exercises, meditation, and 18 different poses. "This wasn't some kind of power Vinyasa yoga class," says Mustian. "It was gentle."

Additionally, the yoga participants had substantially lower levels of fatigue and daytime sleepiness compared with the control group.

The study, the largest of its kind to date, was funded by the National Cancer Institute and will be presented at the American Society of Clinical Oncology's annual meeting in early June.

Danhauer says the findings are good news because yoga that's appropriate for recovering cancer patients is widely accessible and affordable.

"You will probably find someone in your community who has training in Hatha yoga or restorative yoga," Mustian says. She recommends classes that feature one (or both) of these approaches and an instructor who's certified by the Yoga Alliance. Ideally, she adds, the instructor will also be experienced in working with patients with health problems.

At the Albert Einstein Cancer Center in the Bronx, New York, where researchers have been studying yoga in cancer survivors for the past 10 years, patients can continue practicing yoga at the center even if they're no longer participating in the study. "We have several patients who have been doing it for years," says Alyson Moadel, the director of the center's psychosocial oncology program.

It's not entirely clear how yoga helps cancer patients, but it's likely to involve many different processes. The breathing exercises, for instance, seem to help some patients cope with anxiety, nausea, and pain, according to Moadel. "There's also the group support," she says. "They like to go to a group where there are other people like themselves doing this."

Future research will look more closely at how yoga affects the bodies and minds of cancer patients and survivors. Last month, the MD Anderson Cancer Center received an unprecedented $4.5 million grant from the NCI to investigate incorporating yoga into breast cancer treatment. As part of that study, researchers will track the patients' stress hormone levels and use monitors to measure their wakefulness during sleep.

Health.com: 8 natural remedies that may help you sleep