Can a mother's affection prevent anxiety in adulthood? 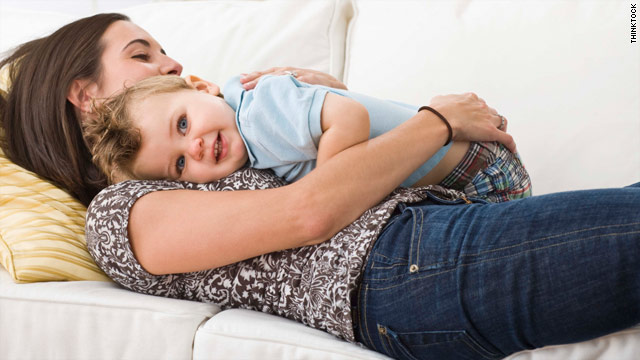 Babies who receive above-average levels of affection from their mothers are less likely to grow up to be emotionally distressed.
STORY HIGHLIGHTS
RELATED TOPICS

(Health.com) -- Babies whose mothers are attentive and caring tend to grow into happy, well-adjusted children. But the psychological benefits of having a doting mother may extend well beyond childhood, a new study suggests.

According to the study, which followed nearly 500 infants into their 30s, babies who receive above-average levels of affection and attention from their mothers are less likely than other babies to grow up to be emotionally distressed, anxious, or hostile adults.

What's more, the link between the emotional health of adults and their mothers' affection was evident even though the mothers and babies were observed for a single day, when the babies were just 8 months old.

"Even a simple assessment of the quality of the mother-infant interaction at such an early age captures something very important in terms of the future psychological health of that infant," says Joanna Maselko, Ph.D., the lead author of the study and an assistant professor of psychiatry and behavioral sciences at Duke University Medical School, in Durham, North Carolina.

The findings, which appear in the "Journal of Epidemiology and Community Health,"make a strong case for policies that would help foster positive interactions between infants and parents, such as paid parental leave, Maselko says.

Health.com: Your secret to happiness at every age

The study also suggests that health insurance should cover services -- such as infant-massage classes -- that have been shown to strengthen the child-caregiver relationship, says Robin Gurwitch, Ph.D., a professor of developmental and behavioral pediatrics at Cincinnati Children's Hospital.

"Early experience can be a mediating factor on what happens to us as adults, and we need to look at things that we can do to improve parent-child bonding that can then perhaps serve as a protective factor later," Gurwitch says.

The study included 482 babies born in Providence in the early 1960s. Along with their mothers, the babies were part of a larger, nationwide study on pregnancy and infancy.

Roughly 30 years later, the babies-turned-adults were interviewed about their levels of emotional distress. The adults whose mothers had displayed "extravagant" or "caressing" affection (the two top ratings) were much less likely than their less-doted-on peers to be anxious. They were also less likely to report hostility, distressing social interactions, and psychosomatic symptoms.

The findings add to a large body of psychological research on mother-child attachment that suggests that healthy bonds between young children and parents are crucial to a child's emotional development.

Maselko and her colleagues suspect that their findings may be explained in part by the hormone oxytocin, which acts as a brain chemical. Also known as the "bonding hormone" or "cuddle hormone," oxytocin is released during breastfeeding and other moments of closeness.

"Oxytocin adds [to] the perception of trust and support, and hence is very helpful in building social bonds," Maselko explains. "It's plausible that close parent-child bonds help support the neural development of the areas of the brain that make and use oxytocin, setting up the child for more effective social interactions and mental health in the future."

For now that's just a theory, however. As the authors note, other factors -- including genetics, a mother's stress levels, or even factors that have nothing to do with the mother -- could explain the findings.

A smaller proportion of mothers with lower socioeconomic status exhibited "extravagant" or "caressing" affection than did better-off mothers, for instance. Although the researchers controlled for socioeconomic status and other characteristics, it's possible that social and financial difficulties during childhood could play a role in adult emotional distress.

Charles Bauer, M.D., a professor of pediatrics, ob-gyn, and psychology at the University of Miami's Miller School of Medicine, says that conclusions about the role of maternal affection on a person's future mental health based on a single day of observation at eight months old are bound to be inexact.

"There are so many intervening variables between eight months and 34 years," Bauer says. "A whole cadre of factors might lead to a more stable environment, a more stable mental health picture, a more stable individual."