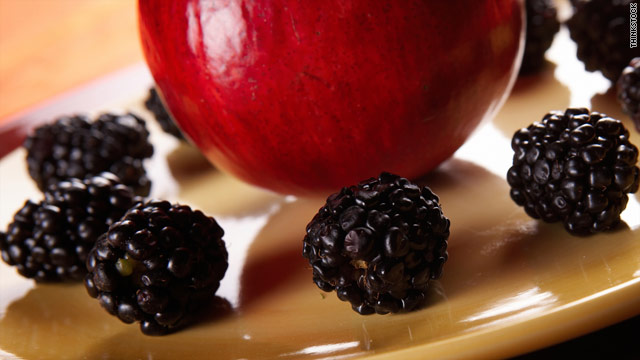 A "brain-healthy diet" is "one that reduces the risk of heart disease and diabetes, encourages good blood flow to the brain."
STORY HIGHLIGHTS

(CookingLight.com) -- Just like the right diet can prevent heart disease, high blood pressure, or cancer, health experts are finding that certain foods may boost your mind.

Although there is no current treatment proven to cure Alzheimer's disease or dementia, there are foods that play a positive role in overall mind health.

The Alzheimer's Association refers to a "brain-healthy diet" as "one that reduces the risk of heart disease and diabetes, encourages good blood flow to the brain, and is low in fat and cholesterol."

Stay on top of your mental ball game with these 10 foods.

Whether it's a new dance or a foreign language, the older you get the harder it is to learn new things.

The reason? In order to process new information our brain cells need to "talk" to each another. Yet, as we age those cells become inflamed making it harder for them to communicate with one another.

Blackberries can get the conversation flowing again. They provide potent antioxidants known as polyphenols that zap inflammation and encourage communication between neurons, improving our ability to soak up new information according to a 2009 Tufts University study.

If you're trying to kick your java habit you might want to reconsider. A recent Finnish study of 1,400 longtime coffee drinkers reveals that people who sipped between three to five cups of coffee a day in their 40s and 50s reduced their odds of developing Alzheimer's disease by 65 percent compared with those who downed fewer than two cups a day.

Researchers believe that coffee's caffeine and ample antioxidants are the keys to its protective affects.

Here's a new reason to munch on an apple a day: Apples are a leading source of quercetin, an antioxidant plant chemical that keeps your mental juices flowing by protecting your brain cells.

According to researchers at Cornell University, quercetin defends your brain cells from free radical attacks which can damage the outer lining of delicate neurons and eventually lead to cognitive decline.

To get the most quercetin bang for your buck, be sure to eat your apples with their skins on since that's where you'll find most of their quercetin.

You've heard the good news that chocolate can lower your blood pressure. Now researchers have discovered it can also keep your mind sharp.

A 2009 Journal of Nutrition study found that eating as little as one-third of an ounce of chocolate a day (the size of about two Hersey's kisses) helps protect against age-related memory loss. They credit polyphenols in cocoa with increasing blood flow to the brain.

Beta-amyloid plaques are one of the trademarks of Alzheimer's disease. The other is tangles in the brain made of tau proteins that can cause brain cells to die.

Emerging research from the University of California at Santa Barbara reveals that two compounds in cinnamon -- proanthocyanidins and cinnamaldehyde -- may inactivate these tau proteins.

While this research is still in its infancy, a sprinkle of cinnamon on your oatmeal or yogurt certainly couldn't hurt.

This leafy green is packed with nutrients that prevent dementia like folate, vitamin E, and vitamin K.

Just one-half cup of cooked spinach packs a third of the folate and five times the amount of vitamin K you need in a day. Maybe that's why a 2006 Neurology study reveals that eating three servings of leafy green, yellow and cruciferous vegetables a day can delay cognitive decline by 40 percent.

Of these three, leafy greens were found to be the most protective. Try your spinach drizzled with a little olive oil. Its healthy fats boost absorption of fat-soluble vitamins E and K.

You may not have heard of them before but ADDLs (or amyloid B-derived diffusible ligands) are Alzheimer's-inducing proteins that are toxic to the brain. In the initial stages of the disease they attach to brain cells rendering them unable to communicate with one another and eventually leading to memory loss.

Extra virgin olive oil may be a potent foe against ADDLs according to research conducted at the Monell Chemical Senses Center in Philadelphia, PA last year. It's rich in oleocanthal, a compound that disables dangerous ADDLs.

This swimmer isn't just good for your ticker, it's good for your grey matter too. Salmon is a top source of DHA, the predominant omega-3 fat in your brain, believed to protect against Alzheimer's disease, an illness that affects over five million Americans.

It's also nature's number one source of hard-to-get vitamin D, a nutrient recently shown to ward off cognitive decline.

A study published in the July 2010 issue of the Archives of Internal Medicine reveals that older people who are vitamin D deficient are 40 percent more likely to suffer from age-related memory loss.

Turmeric, a cousin of ginger, is one of the principal spices in curry powder. Turmeric is especially rich in curcumin, a compound believed to inhibit Alzheimer's disease in multiple ways according to experts at the University of California Los Angeles Alzheimer's Disease Research Center.

Not only does it block the formation of beta amyloid plaques, it also fights inflammation and lowers artery-clogging cholesterol which can reduce blood flow to your brain.

Alzheimer's researchers like to say what's good for your heart is good for your brain. Now they're finding that the same heart-healthy polyphenols in red wine and Concord grape juice can give your brain a boost.

When researchers at the University of Cincinnati College of Medicine gave 12 older adults with declining memory a daily drink of Concord grape juice or a placebo drink for three months, they found that the volunteers who drank the grape juice significantly improved their spatial memory and verbal learning skills.

Enter for a chance to win in our $5,000 Grocery Giveaway