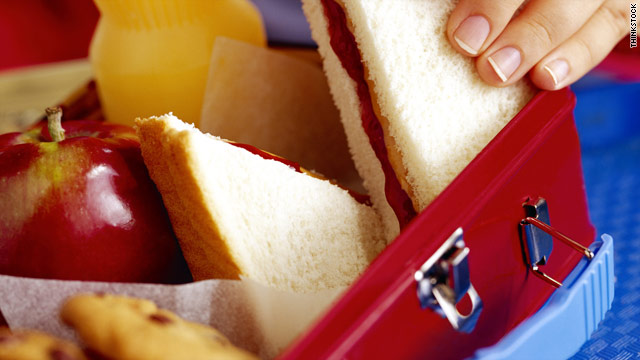 Some children go all day without eating their lunch because they are ridiculed for eating special foods.
STORY HIGHLIGHTS

Bullying is in our schools, and now it's online. Why do kids do it? What can be done to put an end to it? Don't miss an "AC360°" special report in collaboration with Cartoon Network: "Stop Bullying: Speak Up," starting Monday night at 10 ET on CNN.

(CNN) -- It's tough enough having to avoid products with peanuts and other ingredients as a kid with severe food allergies. It's tougher when someone at school waves a granola bar in your face at the peanut-free lunch table.

That's what happened last week to a Pennsylvania fifth-grader whose mother asked that he not be identified. The boy had experienced allergic reactions to merely touching peanuts or breathing peanut particles in the past, so the act of granola-waving was more serious than for other allergy sufferers.

Are you being bullied at school? Share your story

As the prevalence of food allergies grows in America, doctors are becoming more conscious of a disturbing trend in children getting picked on for not being able to eat certain foods.

According to a new study published in the Annals of Allergy, Asthma & Immunology, about 35 percent of children over age 5 with food allergies have experienced bullying, teasing or harassment. The study, which mostly surveys the parents of these children, said those negative social experiences, which included physical and verbal incidents, happened because of food allergies.

"The school has to really address it. It's not the child's job to take care of this problem, because there's already an imbalance of power," said study author Dr. Scott Sicherer, pediatric allergist at Mount Sinai School of Medicine in New York.

Gina Clowes, director of allergymoms.com and a coach for parents on food allergies, hears stories about food-allergic kids targeted by others in school all the time.

"They'll make fun of what they're eating," she said. "I don't know if it's innocent or malicious, but some kids will literally threaten them with the peanut, or 'I'm going to throw peanuts at you.' "

While bullying with regard to food allergies isn't all that different from bullying about other attributes, children with food allergies have an additional burden because they have the responsibility of taking care of themselves medically already, Clowes and Sicherer stressed.

"Here you have a child who already has to deal with not eating the same things as the other children; they already have to worry about is this meal safe for them; about having an allergic reaction," Sicherer said. "This is an additional problem of someone making it even harder on them."

The warning signs are similar to other forms of bullying, Clowes said: A child may appear sad, upset, withdrawn, anxious or say that he or she doesn't want to go to school. But parents should also look for changes in their kids' eating habits: They may come home with an untouched lunchbox, for example.

"I've had parents say kids go the entire day without eating because they're being made fun of for special foods," Clowes said.

The latest data from the Centers from Disease Control and Prevention show that about 3.9 percent of children younger than 18 in the United States have food allergies, representing an 18 percent increase from 1997 to 2007.

None of the incidents reported in the study resulted in allergic reactions, but the danger of them resulting in a dangerous reaction is self-evident, the study authors wrote. The emotional toll is also great. Common consequences included feelings of sadness or depression and embarrassment or humiliation.

This is the first study to address the scope of bullying as it relates to food allergies, the authors said. The information about allergic individuals came from 353 surveys, most of which were completed by parents who were attending various Food Allergy & Anaphylaxis Network conferences.

More children with food allergies may experience acts of bullying and other targeted negative behaviors than their peers, Sicherer said. A 2001 National Institute of Child Health and Human Development study found that about 17 percent of children in grades six to 10 reported being bullied. By comparison, 50 percent of kids in that age group in the food allergy study were reported to have experienced bullying, teasing or harassment.

The study had the limitation of obtaining most data from parents, rather than children themselves. On the other hand, some children likely do not report these incidents to their parents, meaning Sicherer and colleagues could have underestimated behaviors targeted at food-allergic children.

Parents should inform teachers and administrators right away if an incident occurs, Clowes said.

Children should try to stay away from the person who has bullied them and stand by trusted friends, Sicherer said. Ultimately, it also takes intervention on someone else's part to speak to whomever is doing the bullying, so children should tell trusted adults what's going on, he said.

Dr. Stanley Fineman, a practicing allergist with the Atlanta Allergy & Asthma Clinic, said allergists don't normally ask children if they've been bullied or harrassed, but that this study suggests they should. In his own practice, Fineman has heard of incidents such as a child eating peanut butter and then spitting on a peer. He will more regularly inquire about allergy-related incidents because of the new data, he said.

"We as physicians need to specifically ask our patients directly what sort of bullying or harassment type situations have they had in school, because this is something that has not been on our radar screen as it probably should be," he said.

The Pennsylvania mother whose child got a granola bar waved in his face last week isn't worried about her son managing his allergies -- it's the other kids she's nervous about. The teachers at the school have been understanding, but she believes there needs to be more education that one person's allergy is not the same as another's -- and her son is particularly sensitive. She also dislikes that the school puts her son into a category called "peanut kids," who get a peanut-free table.

"It's very open, it's obvious who has a problem and what the problem is," she said. "Sometimes I don't think people understand the severity of it."