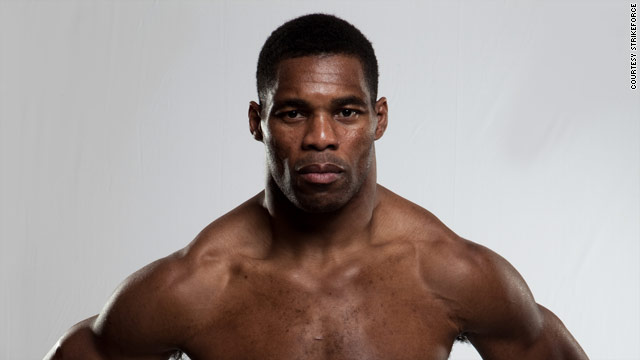 Walker had been out of football for 12 years. Aging football players tend to get flabby, play golf or relive the spotlight under "Dancing With the Stars."

But the 1982 Heisman Trophy winner from the University of Georgia always had an unorthodox streak.

After stints of ballet dancing, Olympic bobsledding, running track and field, gaining a black belt in taekwondo and retiring from a celebrated football career, Renaissance jock Walker has dived into the most physically demanding and controversial sport of his career.

At 48, Walker is training for his second Strikeforce mixed martial arts fight, scheduled for December 4.

"I was in great shape when I was younger," he said. "This is the toughest thing I've ever done. I think that's the reason I'm in better shape than I've ever been in."

He was chosen to pose naked for ESPN The Magazine's "The Body" issue, out last week, to show his muscular physique.

"I'm going to do something different, to be a little different than the average person," he said. "You can't be in the same cookie cutter."

He eats once a day, skipping breakfast and lunch. After a long, intense day of training, he eats salad and bread for dinner. He doesn't care for meat or fuss about getting enough protein. Walker's a vegetarian.

Sometimes, Walker doesn't have an appetite and will go through seven hours of wrestling, kickboxing, sparring and practicing jujitsu without having eaten for three or four days.

"It's just unbelievable," said Mendez, who trains Walker at the American Kickboxing Academy in San Jose, California. "He shouldn't be able to do what he's doing. I don't think it's possible to eat as little as possible and work out the way he does. There's no way. He's an unbelievable athlete."

Mendez doesn't try to change it either.

"You can't fix it, because it's not broken," he said. "You can try to understand it -- good luck with that."

And no, Mendez thinks it probably won't work for most people.

"I try to show the world at my age, I could do it," Walker said. "I'm not trying to be arrogant. My parents say you can't make excuses in life, you've got to get it done."

And he did. In his first Strikeforce fight in January, Walker defeated Greg Nagy, a fighter almost half his age.

Walker's genesis into a Renaissance jock sprang from chubby beginnings.

He was a pudgy boy with a stutter who was picked on and shoved as a child.

At 15, he said he "started working out after watching 'Love Connection' and started doing push-ups and sit-ups," he said. "I started doing it on my own -- that gave me confidence."

As he developed into an athlete, his interests varied from two-man bobsledding to ballet.

"When I started out as little kid, I didn't say I just want to run football. I wanted to be a great athlete," he said. 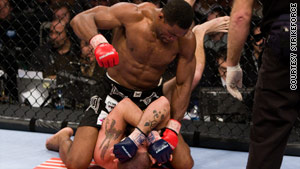 Walker defeated Greg Nagy in his Strikeforce debut in January and plans to fight again in December.

"It's mind over matter. You got to work at it. You can't assume you're a great football player so you'll win in bobsledding. It doesn't mean you don't have to work."

Walker's recent return to competition sends a different message to middle-aged men who believe that getting out of shape is the inevitable part of aging, his trainer said.

"It doesn't matter your age," Mendez said. "You can do it at any age. Look at your desire. Don't let age be a barrier to prevent you from doing something you want to do."

Shortly after his retirement from football in 1997, Walker began having symptoms of mental illness and struggled with dissociative identity disorder, or DID, formerly known as multiple personality disorder.

Herschel Walker reveals many sides of himself

Walker said he receives therapy to control the disorder.

"I have problems and as long as you admit you have a problem, that's how you become better," he said.

He even considered an NFL comeback before deciding on mixed martial arts.

The high-contact, bloody sport has often been criticized for brutality as fighters can knee, elbow and kick each other in the face. Walker shrugs off the criticism about the sport.

"The idea of football is just as physical as MMA," he said. "I don't worry about it."

What if he gets knocked down by a younger, stronger, more nimble opponent in the ring?

"I do this 'Walker shake,' " he said. "You got to get knocked down many times, shake it off. Life is about ups and downs, and you got to keep standing up."