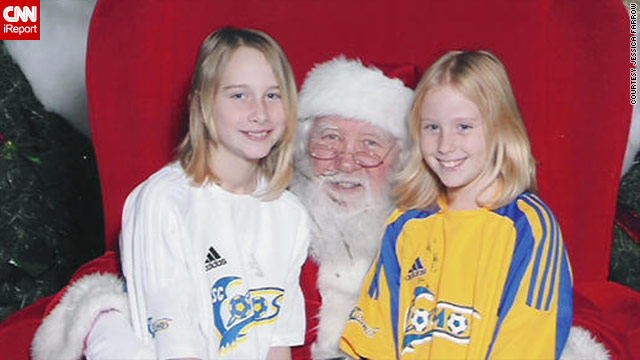 In the picture with Santa from 2009, Harmony and Lindsey Farrow took a photo with Santa in their soccer uniforms.
STORY HIGHLIGHTS
RELATED TOPICS

With that kind of evidence, how could Santa not be real?

But at some point in childhood, kids start questioning the very existence of Santa.

By 8 or 9, most children know the jig is up, development experts said. But the crafty kids feign belief in Santa hoping their enthusiasm will be rewarded in the form of Christmas presents.

"Kids are smart," said Charles Smith, a Kansas State University expert in child development. "They realize he's not real even before parents think they understand that.

"In preschool or early grade school, kids understand all these Santas at the mall can't be Santa. The reality of Santa becomes apparent to them."

Santa Claus is for parents as much as for kids. A 2008 study published in Psychological Reports assessed the emotions of 600 children lined up to meet Santa Claus at the mall. Of the kids, 80 percent looked indifferent while 87 percent of their guardians appeared to be happy.

"It's a fun ritual," said Carole Slotterback, author of "The Psychology of Santa." "I think they get caught up in it being fun, and parents have a hard time letting go."

The realization for kids comes gradually, rather than through one defining moment, said Slotterback, who conducted a survey of college students about their family memories of Santa Claus.

Only one person reported a traumatic experience, after her dad told her Santa Claus had a heart attack and died. Slotterback does not recommend that approach.

iReport: The truth about Santa

Families share a tradition of leaving cookies out for Santa and opening presents in the morning. When the children outgrow Santa Claus, it can seem like an end of a treasured memory.

"You don't want to lose the fun that you share with your parents around the whole thing," Smith said. "I think parents can do that on a wink thing and continue to share that in a common experience."

When is someone too old to believe in Santa?

"A child who sincerely believes at 10,11,12 of the reality of Santa, there's something going there," Smith said. "That's the child not letting go. I'd be curious about that. I wouldn't say that's wrong. I'd want to know more about that child's history and family."

Rather than breaking the news to kids, let them figure it out, experts advise.

If children ask parents about the existence of Santa Claus, bounce the question back by asking, "What do you think?" and facilitate a discussion.

"Kids realize the difference between what's real and what's not real," Smith said. "They start asking questions that should be answered honestly by parents."

Don't go overboard trying to convince the child that Santa is real, he said.

Smith recalled one father who would drive with his son on Christmas Eve to look for Santa. He would point to the sky pretending he saw Santa. The son would strain to see, and the father would laugh.

Slotterback, professor of psychology at the University of Scranton in Pennsylvania, said believing in Santa is not damaging.

"Researchers show that children who participate in fantasy-type play tend to do better and advance cognitively. It's not a harmful thing," she said.

Kids learn the truth about Santa from their peers and older siblings. Parents can get the older children involved in the ruse to keep the magic alive for the younger siblings.

Farrow, a resident of Albuquerque, New Mexico, today is a mother of two girls: Harmony, 13, and Lindsey, 11.

Her girls still get their pictures with Santa every year and leave out cookies on Christmas Eve -- last year, it was chocolate chip and bacon cookies.

When her father suggested the girls were getting too old for Santa, Harmony piped up saying she believed in Santa.

It's a different type of Santa, though.

"They understand it's the spirit of the season," said Farrow, an iReport contributor.

For the holidays, they adopted a family. Harmony helped with the Christmas shopping and wants to find a part-time job to help buy more presents.

"That spirit of giving was the most important thing for her," Farrow said.

"Santa Claus is not real, but what Santa Claus represents for kids, even for adults is true," he said. "It's that sense of joyfulness during this time of the year -- this idea that they're so cared for and loved."