From a tree, a 'miracle' called aspirin 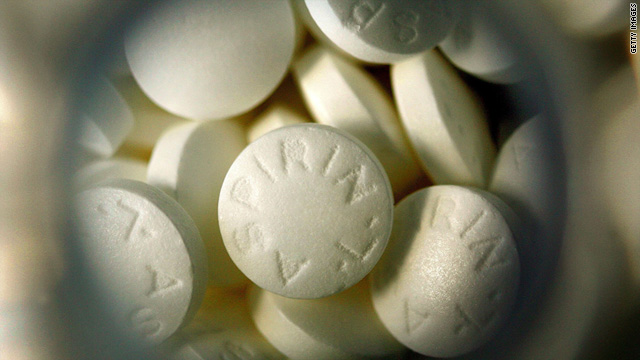 (CNN) -- If you take aspirin, you've got a pain reliever, heart attack preventer and possible cancer preventer rolled into one tablet. You might think that whoever invented aspirin is a genius, but the truth is humans have been using its natural equivalent for thousands of years.

"Aspirin is one of those things that, long before there were ever clinical trials or any kind of scientific knowledge, people figured out, 'Hey, I feel better when I take this substance,' " said Dr. Karol Watson, assistant professor of cardiology at the David Geffen School of Medicine at the University of California, Los Angeles.

The drug has been making headlines because a study in the Lancet recently found that a daily aspirin appeared to lower the risk of cancer by at least 20% during a 20-year period. That's based on data from more than 25,000 patients and builds on earlier findings that aspirin may lower the risk of colorectal cancer. The research has limitations and is not definitive proof, but it does add another benefit to an ancient remedy that has been called a miracle drug.

"There are no countries in which it is unknown, unappreciated, or unavailable," the late medical writer Berton Roueché wrote in 1955, in an article later published in the anthology "The Medical Detectives."

The word "aspirin" wasn't a coincidence. It comes from Spiraea, a biological genus of shrubs that includes natural sources of the drug's key ingredient: salicylic acid. This acid, resembling what's in modern-day aspirin, can be found in jasmine, beans, peas, clover and certain grasses and trees.

The ancient Egyptians used willow bark as a remedy for aches and pains, said Diarmuid Jeffreys, author of "Aspirin: The Remarkable Story of a Wonder Drug." They didn't know that what was reducing body temperature and inflammation was the salicylic acid.

Hippocrates, the Greek physician who lived from about 460 to 377 B.C., wrote that willow leaves and bark relieved pain and fevers.

It wasn't until thousands of years later that people began to isolate the key ingredients of aspirin. An 18th-century clergyman, Edward Stone, rediscovered aspirin, in effect, when he wrote a report about how a preparation of powdered willow bark seemed to benefit 50 patients with ague and other maladies, Roueché wrote.

In the 1800s, researchers across Europe explored salicylic acid. French pharmacist Henri Leroux isolated it in 1829, Roueché writes. Hermann Kolbe discovered synthetic salicylic acid in 1874, but when administered often in large doses, patients experienced nausea and vomiting, and some even went into a coma. A buffer was needed to ease the effects of this acid on the stomach.

The aspirin we know came into being in the late 1890s in the form of acetylsalicylic acid when chemist Felix Hoffmann at Bayer in Germany used it to alleviate his father's rheumatism, a timeline from Bayer says. Beginning in 1899, Bayer distributed a powder with this ingredient to physicians to give to patients. The drug became a hit and, in 1915, it was sold as over-the-counter tablets.

One patient who should not have been taking aspirin was young Alexei Nicholaevich Romanov of Russia, who had hemophilia. Aspirin would make the bleeding in this disorder worse, but the imperial doctors likely gave the boy this new wonder drug without knowing, Jeffreys said.

Alexei, son of the last czar, probably improved because the mystic Grigori Rasputin told the boy's mother to stop modern treatments and instead rely on spiritual healing. Rasputin's influence on the Romanov family may have contributed to the uprising against them, making aspirin a possible player in their murder and in the end of czarist Russia.

Aspirin's uses for heart patients came to light in 1948 when California physician Dr. Lawrence Craven recommended an aspirin a day to reduce heart attack risk, based on what he had observed in patients.

The Nobel Prize in medicine in 1982 was awarded to researchers who demonstrated the reason -- it inhibits production of hormones called prostoglandins. Prostoglandins are responsible for the formation of clots that leads to heart attacks and strokes, and aspirin prevents that clotting from happening.

Today, aspirin is universally recognized as heart-attack prevention in men who have had prior heart attacks, and it has also shown to have benefits against stroke in women.

More than one-third of all adults, and four out of five people with heart disease, use aspirin regularly, according to data from the Centers for Disease Control and Prevention presented in a 2006 study. And the number of regular aspirin users rose 20 percent from 1999 to 2003.

Still, it's not necessarily the go-to for over-the-counter painkillers. In 2007, pain relievers such as Advil, Tylenol and Aleve were among the top five analgesics sold; aspirin did not make the cut.

"If you're hurting, you're going to reach for a stronger pain reliever," Watson said. "In most cases, a baby aspirin a day is not going to make you feel any better or worse."

The U.S. Preventive Services Task Force recommends that men 49 to 79 take aspirin to prevent heart attack, and that women 55 to 79 take it to guard against ischemic strokes, when the potential benefits outweigh the potential harms from an increase in gastrointestinal hemorrhage. In other words, aspirin can increase bleeding because of decreased clotting, so if you have bleeding problems, it's not a good idea.

People who need to take aspirin because of prior heart attack can reduce the risk of stomach bleeding by taking a medication that cuts down on stomach acid like omeprazole (Prilosec), said Dr. Harvey Simon, associate professor of medicine at Harvard Medical School. Still, "we don't like people to take medicine to reduce effects of another medicine," he said.

Aspirin's potential cancer benefits have come on the scene more recently, and there aren't standard guidelines in that regard. The agency discourages taking aspirin to prevent colorectal cancer in people with average risk for that disease. Also, the mechanism isn't entirely understood, although the thought is that aspirin helps the body cut off blood supply to cancer growths, Jeffreys said.

Aspirin is in the family of nonsteroidal anti-inflammatory drugs (NSAIDs), many of which have been implicated in heart risk rather than prevention. Among the NSAIDs, the more potent pain relievers tend to carry more potential for cardiovascular damage, Watson said.

Famously, the drug rofecoxib (Vioxx) was withdrawn from the market in 2004 because of heart concerns. A recent study found that painkillers called opioids heightened heart attack risk in addition to bone fracture when compared with patients taking NSAIDs such as aspirin and ibuprofen. And research published in June found that some NSAIDs may increase risk of cardiovascular death.

Aspirin has a lot of cheerleaders, but it's important to keep the downsides in perspective. Dr. Scott Fishman, chief of pain medicine at the University of California, Davis, points out that as a pain reliever, aspirin's effects are potent but short-lived. The way that aspirin inhibits enzymes in the stomach can lead to ulcers, which can be especially harmful in combination with decreased clotting.

The drug works as a pain reliever because it blocks an enzyme that's required for the process of inflammatory response, he said.

Patients should not just take it without consulting their physicians, Fishman said. Certain conditions such as bleeding disorders make taking aspirin dangerous. Some supplements, such as fish oil and garlic, can also cause bleeding problems in combination with aspirin, he said. Aspirin is not approved for children younger than 2 and should be used with caution in very young people because of a possible link to Reye's syndrome.

Still, it's likely that aspirin has even more benefits that just haven't been discovered yet, Jeffreys said. In his view, the drug is taken for granted, and not enough emphasis is placed on it.

"If I'm stranded on a desert island, and I can take one drug with me, that's the one I'm taking," Watson said.