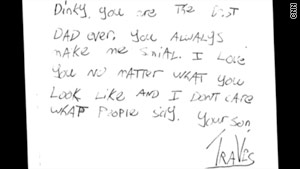 A note from Stanton's son says: "You're the best dad ever. You always make me smile. I love you no matter what you look like and I don't care what people say."

Below is an essay written by Steven Stanton's son Travis after he learned that his father was going to become a woman. The story of his father's transformation can be seen on "Her Name Was Steven" at 8 and 11 p.m. ET Saturday on CNN.

Throughout my whole life, I thought my dad was a really tough guy.

He went out with the cops and busted bad guys. He shot guns, fought fires, he was an aggressive driver, and he liked football and lots of sports.

Then, one day my thoughts changed about him when we had a family meeting and he told me how he felt about himself.

He said he felt like a woman on the inside and was going to change into one. He said he tried his best to be a manly guy, but he couldn't stop his feelings to become a girl.

I was very surprised to hear this.

At first, I thought I was in a dream.

It was very hard to believe such a thing. I thought he was a 100% manly man, like more manly than most guys. After a few days, I thought about it.

I knew he was making the right choice to become a girl.

Although I can't relate to his feelings, it must be really hard to hide something like that. It would be like having one million dollars and not being able to spend it. After just so long, your feelings would take over and spend it.

Now, though, I am very proud of my dad.

Read Travis' response to some viewer questions about his father

After I saw him, and saw that inside he was the same dad as he always was: he still likes football, he still likes to be an aggressive driver. He is still the same person, but just different on the outside.

I am very happy for him now that he is who he wants to be.

I think that everyone should be who they are and not try to be the same as other people.

If you ask me, this has got to be the manliest thing he has done in his whole life.

It takes a real man to come out of your shell and say, "hey, I am who I am" and take the responsibility of doing that.

In conclusion, I thought my dad was a man, like, gender wise, but now he is who he is meant to be.