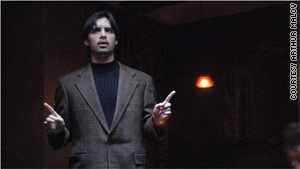 Atlanta, Georgia (CNN) -- Dean Melcher was the kind of guy who befriended girls easier than boys. He was a tad shy, consistently thoughtful and surrounded by women, but he still couldn't get a girlfriend.

"I think I was kind of clueless and oblivious," admits Melcher, who spent his early 20s lingering in the friend zone. "Women wanted the bad boys."

Everyone probably knows a Mr. Nice Guy like Melcher, who is now 46. He's the guy who patiently listens to a girl complain without interrupting her. Because of his sweet nature, he puts the girl's demands first, altering his weekend plans to fit her schedule. He may be uneasy about making a decision for fear of being domineering.

But after all his diligent efforts to be a gentleman, she turns him down, and he is left to wonder: Do nice guys finish last?

"Girls might say they want a nice guy, but what they really want is the cool guy," said Arthur Malov, founder of New York Dating Coach, a relationship consulting agency with primarily male clients. "A jerk is rarely so bad that no one wants to hook up with him."

Now, some single guys are taking steps to avoid being lumped into the nice guy category. Malov's agency, which coaches single men from all over the U.S. and as far away as Japan and Norway, instructs clients to steer away from the polished, predictable image. The dating coach tells men to stop being so available and flexible. He advises the men to leave a little mystery because women, despite what they say, do desire the chase.

Malov says the nice-guy persona is the No. 1 problem cited by his male clients, and he explains why, using the game of poker.

"A lot of nice guys are showing all his cards and saying, 'What should I do?' " he says. "After that, nothing happens."

The Modern Man, a company based in Australia that provides dating advice, suggests a similar anti-nice guy solution: Stop wasting money on expensive dates, and don't always cater to her needs first.

"Realize that women don't want you to hand over your power by being a Mr. Nice Guy in return for their affection, love and attention," said Dan Macon, who runs The Modern Man. "Sure, women want you to show them respect and love, but they also want you to be a man and take charge. If you can't do that, women won't want to be with you."

Neil Strauss, author of the "The Game," a best-seller that explores ways for men to pick up women, once found himself in the Mr. Nice Guy category. He was friends with a girl he liked. He was painting her walls one time when she left to go on a date with another guy. Strauss quickly figured out that women desire someone who is kind but also has a backbone and is confident.

"The dichotomy isn't between good guys or bad guys," he explained. "It's between weak guys and strong guys."

Being a nice guy has always backfired in relationships, says 21-year-old David, a University of Connecticut student who declined to give his last name. He said he used to put women on a pedestal -- giving them thoughtful gifts and taking them out to fancy dinners. But he stopped doing those things over the last two months and made himself less available. He's not trying to be cocky or mean to women, but his new attitude is getting him more dates.

"I'm starting to think: What should someone offer me?" he said.

Robert Glover, author of the 2003 book "No More Mr. Nice Guy," says the nice guy personality is usually developed at a young age and is probably shaped by the guy's parents. For example, he found some men with the nice guy persona were heavily influenced by their mothers. Other men were trying to avoid a macho-male personality or philandering behavior displayed by the father.

As a licensed counselor in Washington, he's listened to many men groan about being in the nice guy rut. Glover said that nice guys, like himself, were often nonconfrontational and constantly seeking approval -- both destructive behaviors in a relationship. Being too nice landed him in divorce court.

"In general, women like the tension, or they will lose interest quickly," he said.

This nice guy backlash may sound unpleasant, but some men blame women who disregard the nice guy as an option. Some women interviewed say they equate a nice guy with being a boring guy. Others used words like "marshmallow," "doormat" and even "creeper."

Academic studies have reaffirmed that women prefer the bad boy archetype over the nice guy. A 2008 study at New Mexico State University in Las Cruces examined how college students perceived "dark" traits such as thrill-seeking behavior, deceitfulness and narcissism. The study found the female students preferred the males with these traits.

In her seven years of dating coach experience, Lisa Shield of Los Angeles, California, discovered that a majority of female clients prefer a man with edge who draws boundaries. Her clients reject nice guys as too malleable.

"I find that when the guy is sweet and polite, I tend to become the more masculine of the two of us," said 39-year-old Lisa Lyons of California. "It throws the balance off."

Despite this attitude, some dating coaches say that women should keep an open mind. The negative stereotypes of a nice guy aren't always true; the men aren't always timid or easy pushovers. While the nice guys may not be as forward or loud, their selfless personality can be valuable to a lasting relationship, they say.

Being Mr. Nice Guy worked to Melcher's advantage when he met his future wife when he was 23. She strolled into the bank where he worked one day, and he seemed nice, so she asked him out to coffee that day -- a date that would evolve into a successful marriage.

Sometimes, all it takes is for the girl to give the nice guy a chance.