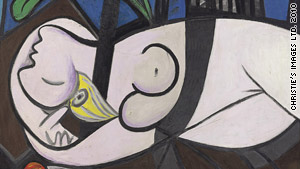 Experts had referred Picasso's "Nude, Green Leaves and Bust" as "lost" because it had never been published in color.
STORY HIGHLIGHTS
RELATED TOPICS

"Nude, Green Leaves and Bust" sold for $106,482,500 to an unidentified telephone bidder, the auction house said in a news release.

"Silence fell over the packed saleroom as Christopher Burge conducted nine minutes of bidding that involved eight clients," it said. "Christie's lead auctioneer took bids from a client in the saleroom as well as those on the phone before the competition settled down to two bidders at the $88 million mark and a one-on-one battle ensued. The final bid was hammered down at 7.32 p.m. at $95 million."

The buyer's premium -- the additional fee paid to the auction house -- took the price of the painting to $106.5 million.

"Nude, Green Leaves and Bust," or "Nu au Plateau de Sculpteur," is from the collection of Los Angeles philanthropist Frances Lasker Brody, who died last November and was the wife of the real estate developer Sidney F. Brody. The collection, amassed primarily during the 1940s and 1950s, had been in the family's home since.

Experts had referred to the 1932 work as "lost" because it had never been published in color. It shows Picasso's muse and mistress, Marie-Therese Walter.

The previous highest price for a work at auction was $104,327,006 paid for "L'Homme Qui Marche I, bronze" (Walking Man 1), 1960, by Alberto Giacometti. It sold during an auction at Sotheby's to an anonymous telephone bidder in February, 2010.

Those who missed a chance to bid on the Picasso can bid on its prior owners' 2.27-acre estate in the Holmby Hills neighborhood of Los Angeles. The 11,500-square-foot, five-bedroom, four-staff bedroom house was built in 1950 and is listed at $24.95 million, according to Coldwell Banker Previews International.