Women: We were child brides in U.S. 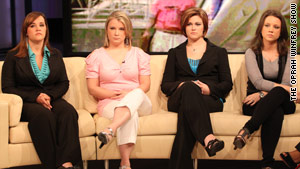 (OPRAH.com) -- At first glance, Jeanne, Amy, Nikki and Desiree don't seem to have much in common.

Despite their differences, these women are bonded by the horrors they say they experienced as children. Jeanne, Amy, Desiree and Nikki were all born into the Tony Alamo Christian Ministry, which, some say, is a cult.

In the 1980s, Alamo, a self-proclaimed prophet of God, had thousands of devoted followers in the United States, including the parents of Jeanne, Amy, Desiree and Nikki. "When Tony would say that God spoke to him, everyone believed it," Jeanne says.

At the height of the ministry's popularity, many followers lived in compounds, including one in Fouke, Arkansas. Outsiders had no idea what was going on beyond the barred windows, but these four women know all too well.

Ex-followers say that by the late 1990s Alamo was living in this sprawling compound with more than a dozen women, some of whom he called his "spiritual wives." Though no legal documents were ever signed, Jeanne, Amy and Desiree say they were three of Alamo's "wives." But when they said their vows, they hardly qualified as women -- they were still girls.

Oprah.com: A former polygamist speaks out

Jeanne says that when she was 15 years old Alamo, who was 59 years old and her pastor at the time, forced her to become his spiritual wife and have sex with him. Amy says Alamo made her say vows and submit to his sexual desires when she was 14.

Nikki says she was 15 years old when she realized Alamo planned to make her his next "wife." Nikki escaped the compound and fled before Alamo had the chance to act.

Jeanne, Amy and Desiree say they lived as Alamo's "wives" for years and endured abuse before they were able to leave. They eventually fled the compound and left the church that once ruled their lives.

Then, in July 2009, these four young women came face-to-face with Alamo once again. This time, in federal court. Despite pressure from family members and friends who still belong to Alamo's church, they testified against their former leader.

A jury found Alamo guilty of transporting minors across state lines with the intent to have sex, and he's now serving 175 years in prison.

Alamo's attorneys are planning to appeal the case.

Many Americans have never heard of Alamo or his ministry, but Lynn LaRowe, a Texarkana Gazette reporter who's been covering Alamo's story for years, says he began making a name for himself in Los Angeles in the late 1960s.

"Tony Alamo said God appeared before him in his body and told him that he needed to go spread the Lord's message or that he would surely die," Lynn says.

Their ministry gained thousands of followers and became a huge success. Then, in 1982, Susan died of cancer. Former members say that's when Alamo's dark side was unleashed.

Alamo reportedly put his wife's dead body in his dining room, and former church members say he made men, women and children pray over her corpse for almost two years. They were told their prayers would raise Susan from the dead, but when it didn't work, a former member says Alamo blamed his faithful followers.

Oprah.com: She escaped a polygamist community

Over time, Alamo began to exert more control over members of the Tony Alamo Christian Ministry. He turned his church it into a multimillion-dollar business, built on the backs of devoted followers.

"They spent all of their time either praying or working in some capacity for the ministry," Lynn says. "They were completely physically, if not psychologically, as well, exhausted. So there was no time for independent thinking."

Emboldened by his success, Alamo wasn't afraid to share his radical views with the world. During a 2008 interview with CNN anchor Rick Sanchez, Alamo ranted against the Catholic Church and argued that the Bible implies that puberty is the age of consent.

Jeanne, Amy, Nikki and Desiree say that when they lived in Alamo's Arkansas compound, he controlled every facet of his followers' lives, and threatened violence and eternal damnation if they dared to disobey him. "He was the one who laid down the rules," Desiree says.

Nikki says Alamo decided everything, from who could get a driver's license to whom a member could marry.

Jeanne, Amy, Desiree and Nikki say that when Alamo set his sights on a young girl in his congregation, her parents couldn't say no. In fact, some believed becoming one of his spiritual wives was an honor.

"My mom had told me the only person I was going to marry was Tony Alamo," Amy says.

Once Alamo "married" a girl, Jeanne says he used her to fulfill his sexual desires. "Tony Alamo had up to 13 wives. About, I would say, half were minors, and he had had sex with every single one of us," she says. "He preferred the younger ones."

When Desiree was an 8-year-old little girl who loved playing with dolls, she believed Alamo was a prophet. But, she says, she still felt that what was happening was wrong.

"I just remember Tony bringing me into his room at one point. He laid me on the bed, said the marriage vows, said 'I do,' got a wedding ring, and after that, what actually made it final was, instead of a marriage license, you had sex," Desiree says. "I didn't know about sex. I didn't know about any of that. What kept going through my mind was: 'How can this be right? Isn't this wrong?'"

Despite what she'd been taught all her life, Nikki says she also felt that Alamo's manipulation and teachings were wrong. "I thought, 'If this is heaven and this is what's going to get me to heaven, I'm going to have to go to hell,'" she says.

Nikki says that in 1999, after she realized she would become Alamo's next spiritual wife, she took action. Although Alamo had taught her to fear the outside world, she found the courage inside herself to run.

One afternoon, Nikki says she fled the compound. She eluded Alamo's security guards by running through thick brush for hours. "He sent every person out to look up and down the highways," Nikki says. "They went through every store, every fast food place."

After running for miles through the woods, Nikki was exhausted and terrified. Finally, she spotted a house across a field and hurried to the front door. Vince and Karen Coker, strangers who lived in the house, took a leap of faith and invited her to stay the night.

The Cokers offered Nikki a change of clothes, a warm bath and a bed to sleep in. "I remember laying in the bed. I felt a little bit safe," Nikki says. "I thought, 'Maybe, maybe they will really help me.'"

Oprah Show producers reached out to Alamo for a statement, but he never responded.

But Alamo's church, which is still in business, sent a message. This is part of it, verbatim.

"Tony Alamo has no secret world or child brides. He is the least secret person in the world. His church and he are open daily to the public, and he is very outspoken, as an open book. Oprah and the government media and the Roman Catholics are in conspiracy against him and his whole church."