Commuters can learn from birds, bees

By Peter Miller, Special to CNN 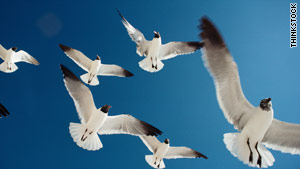 Birds don't crash into one another while flying in flocks.
STORY HIGHLIGHTS
RELATED TOPICS

Editor's note: Peter Miller is the author of "The Smart Swarm". He's also a senior editor at National Geographic, where he has served as a writer and editor for more than 25 years.

(CNN) -- You know how you sometimes get stuck in traffic on your way to work, and when you reach the end of the jam there's nothing there?

No accident. No merge. No reason for the delay?

It makes you feel like you're a helpless drone in a commuter swarm.

In a way, you'd be right. Commuting is one of the many ways we take part in group behavior. What happens to each of us on the road depends on how all the other drivers behave. For a time, our fates are linked like bees in a hive.

We just aren't very smart about it.

That phantom traffic jam was probably caused hours ago by somebody who cut in front of somebody else. That caused other drivers to hit their brakes in a cascade of red taillights until traffic came to a complete stop.

Meanwhile, the driver who started the whole thing is already at the office checking his or her e-mail -- and the jam lives on and on.

Swarms in nature face similar situations, but with millions of years of practice, they're better at it than we are.

• Fish in a school don't jam up just because one fish cuts in front of another.

• Birds in a flock don't crash into one another when the group suddenly changes direction.

• If honeybees returning to the hive with pollen run into a traffic jam at the hive entrance, other bees inside the hive rush to open the bottleneck. They do what's good for the hive.

Ever get trapped on a committee that's supposed to make a decision but nobody's really listening to anybody else? You say your thing. Somebody else says her thing. It goes around and around, and you end up going with whoever's the loudest?

Honeybees don't do that. When they need to find a new home, scout bees search the neighborhood for the best real estate. If one of them thinks she's found the perfect spot, the others don't jump on the bandwagon. Instead, each examines the site for herself (honeybee workers are all female). If they agree that it's a good site, they go back to the swarm and lobby for it, too.

The decision-making turns into a competition to see who can rally the most support, and, in the end, the group as a whole almost always picks the best site. They have to, says biologist Tom Seeley of Cornell, because the group's survival is riding on it.

Nature's full of intelligent behavior. We don't often recognize it because groups in nature work so differently from the way we do. As we find ourselves more and more connected to one another in work groups and social networks, though, we might discover we have more in common with groups in nature than you'd think.

Take a school of fish, for example. One reason fish hang out in large schools is that they gain a greater awareness of what's going on in the ocean. A thousand pairs of eyes are better than one at spotting something good like food or something bad like a hungry barracuda. Social networks such as Facebook do much the same thing for us, for better or for worse, by allowing news and gossip to spread from friend to friend as fast as ripples in a pond.

If you take a close look at an ant colony, similarly, you might be surprised by how much work is getting done. Maintenance ants are repairing the entrance hole. Trash collectors are hauling out garbage. Foragers are looking for food, and patrollers are keeping an eye on the neighbors. The whole thing looks like an efficiently organized factory.

The big surprise is that there aren't any bosses running this factory -- no managers, foremen, supervisors, senior vice presidents or CEOs. Nobody reports to the queen, whose only function is to lay eggs. From top to bottom, nobody's telling anybody else what to do. Yet the whole enterprise works just fine.

It's not because the ants are smart. "If you watch an ant try to do something, you'll be impressed by how inept it is," says biologist Deborah Gordon of Stanford. "The longer you watch an ant, the more you end up wanting to help it."

It's because the ant colony is smart, she says. By working together as a group, the colony is capable of taking care of problems way beyond what an individual ant can do. Wouldn't it be great if the groups we belong to did the same thing -- if instead of making us feel like powerless drones, they made us smarter and more capable?