In Katrina's shadow, memories of a 'perfect' neighborhood live on 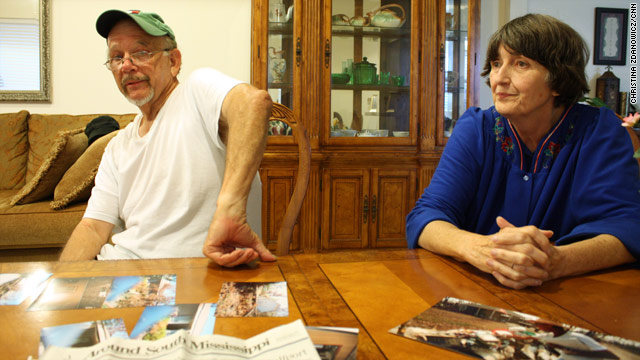 Paul and Carolyn Hollister, 72 and 67, look over photos of Hurricane Katrina's damage and reminisce about the devastating storm
STORY HIGHLIGHTS

Waveland, Mississippi (CNN) -- With Hurricane Katrina bearing down on the Gulf Coast, Paul and Carolyn Hollister grabbed a few belongings and headed to Florida in their RV. The couple figured they'd be gone for just 48 hours as they left their Waveland, Mississippi, home.

When they returned 10 days later, Waveland was in ruins.

"We passed our house and didn't even recognize the area because there were no landmarks," Carolyn Hollister said. They spotted their home in the rearview mirror and turned around.

Unable to pry open the front door, the couple clambered through a broken window and stepped into knee-deep mud. The noxious smell of floodwater mixed with sewerage made Carolyn Hollister want to vomit, she said. Seeing the whole living room torn to pieces, smashed antique furniture and remnants of memories in the muck, was too much to bear.

"I couldn't believe my eyes," said Carolyn, now 67. "My heart was broken. I just started crying. I was just so devastated. Everything that we had worked for 40 years was just gone."

Hurricane Katrina directly hit Waveland and the neighboring town of Bay St. Louis, Mississippi, on August 29, 2005, leaving a swath of destruction for miles. The seaside communities were slammed with 130-mph winds and a massive 35-foot tidal surge, according to a Federal Emergency Management Agency statement from 2006.

The storm was a devastating blow to the community that had rebuilt from Hurricane Camille just a few decades ago. Hurricane Katrina damaged 95 percent of Waveland's homes, leaving thousands homeless in the town of more than 7,000 people.

Media outlets dubbed Waveland, located 50 miles east of New Orleans, as "ground zero" of the storm. The commercial center of town, Coleman Avenue, used to be the place to watch parades and festivals and enjoy good food and fun. But along with homes, Katrina destroyed casinos, seafood restaurants and dozens of churches in the area.

The Hollisters' modest brick, ranch-style house was one of the few structures left standing.

Memories all that remain

Paul Hollister said he's grateful to have a home at all. "Most people lost everything -- their whole house just crushed to the ground," he said. "We're lucky we had a house, because we had no where to go, really."

Though they were able to salvage their home, nearly everything inside was destroyed, including cherished belongings they had moved to the attic. Irreplaceable photos, baby shoes, dance costumes and letters from their only child Becky, who died more than 20 years ago, were all washed away.

"I had her baby clothes, I had so many things here," said Carolyn. "A letter she had written me. Her phone message, so I could play it every once in a while. Those things, you can't replace."

Luckily relatives found a photo of Becky in their own albums for the Hollisters. Her light-brown hair and porcelain skin glow in the photo, which sits on the Hollisters' kitchen countertop.

It's memories of their daughter and their old neighbors that the Hollisters cherish most now. Carolyn Hollister recalls piling up their destroyed belongings outside their home when they returned to Waveland. "It was our life stacked out there," she said. But she said she's not as attached to material items since Katrina. "It changes your outlook on life," she said.

Today, their home is full of reminders of the storm: before-and-after coffee table books and stacks of photos they took in Katrina's aftermath. They proudly point out the few possessions that did survive the flooding, from the side table that now stands slightly crooked to the sturdy old lamp that's still in working condition.

"Not only had we lost our home and our possessions, but we had lost our friends," said Carolyn.

"It was a wonderful community right in this area. ... The kind of friends that help each other and if someone needed something and they were sick, you went to the store for them."

The Hollisters' tight-knit retirement neighborhood fell apart in Katrina's aftermath. Dozens of the residents moved to other towns across the South, no longer wanting to live so close to the ocean. Other neighbors died in the storm. Only the Hollisters and one other couple chose to rebuild and stay.

The loss of community has been difficult to bear. The Hollisters say they feel as isolated as their home that survived the hurricane.

Fifteen homes now line the streets of the small neighborhood, just half the number of houses that once stood. Empty lots dot the street, a constant reminder of now-absent neighbors.

The Hollisters, married for 46 years, spent their entire lives on the Gulf Coast. They grew up in Hammond, Louisiana; lived in Metairie, Louisiana; and moved to Waveland in 2000.

Not only had we lost our possessions, but we lost our friends.
--Carolyn Hollister
RELATED TOPICS

Waveland was the ideal place to settle down, said Paul Hollister, 72. Folks would make the hour-long drive from New Orleans for a weekend of fishing or relaxing at their summer homes, he said.

"It was the perfect place to retire to. Good restaurants and good seafood and the casinos," she said.

While the community may be forever altered, it's still home to the Hollisters, who couldn't imagine living anywhere else.

"Slowly the friends are coming back," Carolyn said. "We can meet at restaurants and our houses, but it's not like being in your robe and slippers being able to have coffee with your neighbor. They're coming back and I love that, but it's not the same community."