Why the right side of your brain doesn't like Arabic 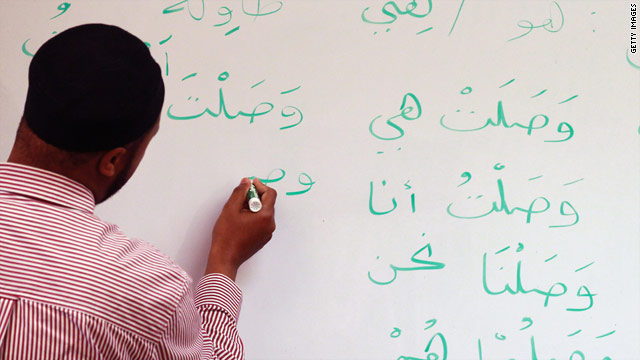 (CNN) -- If you've ever struggled to learn Arabic or felt overwhelmed just looking its symbols, now you can blame science.

Researchers from the University of Haifa in Israel say intricacies in Arabic script are so complex that the right hemispheres of learners' brains don't even bother getting involved.

The university's department of psychology and the Edmond J. Safra Brain Research Center for the Study of Learning Disabilities conducted a series of studies on why Arabic might be more difficult to learn than other languages.

Some Arabic characters look exactly like others but with different meanings and sounds -- and with only slight variations such as lines or dots, the university said. To add to the confusion, some sounds are represented by a variety of different symbols.

"The results have revealed that the right brain is involved in the reading process for English and Hebrew, but not for Arabic," the university said.

According to the researchers, identifying details such as the location and number of dots that is critical in differentiating letters in Arabic. But that's a hard task for the right half of the brain because that hemisphere primarily uses broader information to identify letters.

"This means that children acquiring languages other than Arabic draw on the use of both hemispheres in the first stages of learning to read, while children learning to read Arabic do not have the participation of the right brain," the researchers said. "Hence, it may be the case that reading processes take longer to be automatized in Arabic."

The overall findings support the hypothesis that the complexity contributes to the difficulty and slowness of processing in reading Arabic, the university said.