Should parents kiss their kids on the lips?

By Susannah Breslin, The Frisky 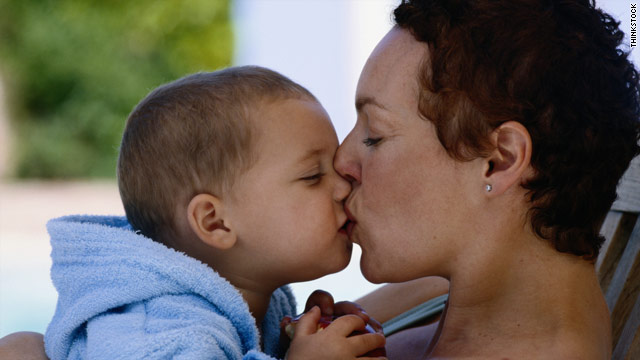 Some people find the act of a parent kissing his or her child on the lips inappropriate.
STORY HIGHLIGHTS
RELATED TOPICS

(The Frisky) -- Personally, it feels strange even writing that title.

The Frisky: I'm afraid to date because of serious debt

One is a reader of the advice column penned by Margot Howard (daughter of Eppie Lederer, who once wrote an advice column as the famous Ann Landers) who wrote in under the name "Want My Husband's Lips for Myself" to complain that her husband regularly gives a peck on the lips to his 5-year-old daughter.

And, really, the letter writer's name ("Want My Husband's Lips for Myself") says it all, doesn't it?

WMHLFM wrote into advice columnist Dear Margo asking if the fact that her husband kissing his daughter on the lips completely freaks her out was weird or not.

His daughter (the advice seeker's stepdaughter) is five, and this stepmother of one year, who has kids of her own, says that her husband kissing his daughter on the mouth is "driving me crazy" and "aggravates me to no end."

The Frisky: James Franco would tell you if he was gay

The crime, as she describes it, is a "peck," but, she declares, it belongs on the girl's cheek, not her lips.

"I even explained that you do not kiss on the lips unless you are married," she waxes. "I have mentioned that I'm totally against the gesture; he said he will do so until the day he dies." Why so upset, stepmom? According to her, it's "a sexual gesture and very inappropriate."

Can I just say, Are you kidding me? A father can't kiss his 5-year-old on the lips? Because it's "sexual"? According to whom?

According to her, that's who, someone who makes it clear by her moniker that she's jealous of the affections that her husband bestows upon his daughter, which, for the record, I think is the real issue here, and the kissing is just her way of expressing it and making her pathology their (imaginary) pathology.

The Frisky: 12 celebs who deny getting breast implants

To a degree, Margo agrees with WMHLFM, deeming the activity "creepy." Although, ultimately, advice-giver Margo seems to believe that it is not inherently "sexual" and to each is own.

"Ask yourself why you feel so possessive of his lips and whether it is hard to share his affection?" This was my initial question as well.