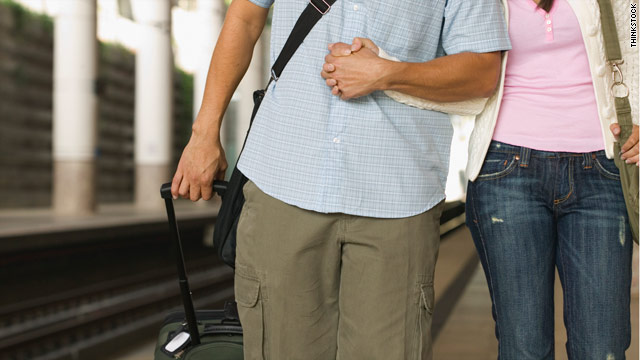 Angelowicz and Parry argue that women are often better at working through emotional baggage than men.
STORY HIGHLIGHTS
RELATED TOPICS

(The Frisky) -- Let's face it -- we've all got issues and sometimes need multiple attempts to surmount emotional obstacles. But some of us are better at dealing with them than others and, we argue, women are often better at working through emotional problems than men.

In the last few years of dating, we've come across 10 types of "emotionally stunted" guys -- adult men who may otherwise be awesome but for some reason never matured emotionally.

These dudes are stuck in emotional "playpens" preventing them from forming healthy (and intimate) adult relationships and where the women in their lives are in the position of either pushing them around like toddlers in a baby carriage or screaming "Get up and walk on your own!" before heading out the door.

Usually, emotional immaturity isn't obvious right away. In the first few weeks and months of dating, as our best selves are presented, we've found ourselves thinking, Finally, a guy who isn't emotionally stunted! He's a MAN -- not a man-CHILD! But at some point, the curtain is pulled back just like in the "Wizard of Oz" and, yup, his emotional issues are right there.

1. "Nuh uh! I'm not emotionally stunted! You're the one with the problem, meanie!"

To which we reply, "Smell ya later." And so should you. Here is our roundup of the top 10 types of emotionally stunted men (often seen in combination), the kind of women they're after, and what they need more than you coddling them a second longer.

1. The Addict: Oy. Where to begin. Here's the important thing to remember: The Addict will ALWAYS be looking for a high. ALWAYS. Even if he is sober from drugs/alcohol/gambling/food, if he hasn't done "the work," he may get hooked on you.

The Frisky: 25 signs he is not relationship material

The woman he wants: Someone who gets him high. He's looking for a feeling. Maybe it's the married woman, his crush from high school he never thought he would get, or the ex he dumped years ago. It's all about the thrill for him. And once that thrill wears off ... he's jonesing for the next.

What he really needs: To work through his co-dependency issues and learn how to cope with life on his own before involving anyone else.

The Frisky: A dress made for Coco's assets

What he really needs: To realize that you are NOT his mother. And, more importantly, to understand the relationship dynamic with his mother. If he has issues to work out with her, he needs to do it before he invites another woman into his life.

3. The Flounderer: He's unhappy in his career, either because he hasn't advanced as much as he thought he would have or it's not what he wants to be doing, period.

The woman he wants: Someone to motivate him and stroke his ego all the time because he's not getting that kind of love in the workplace.

What he really needs: To go after what he wants hard and on his own initiative instead of whining to you about it all the time

The Frisky: Joe Francis and 9 celeb players who settled down

4. The Insecure Narcissist: Initially, this gentleman comes off as exceedingly confident -- he thinks he's the best at his job, takes good care of his appearance, and is often the life of the party. But he also cannot take a joke at his expense, overstates how successful he is, and is never happy for anyone who's doing "better" than him -- including the woman he's with.

The woman he wants: Someone who won't ever challenge him or give him grief, even as a joke. If she does, he'll find her insecurities and go at them with a hacksaw, so she's brought down to his level, making him feel better about himself in comparison.

What he really needs: To stop pretending like he's God's gift to the world and be OK being vulnerable, and realize that he's not fooling anyone with that act anyway.

The Frisky: 8 celebs swindled by their own families

5. The Career Obsessive: Here's the thing about dudes: They are not all that great at multi-tasking, but The Career Obsessive is the worst of the lot. His sole goal in life is to rise to the top and it's not until he gets there that he'll actually be emotionally available.

The woman he wants: Someone who understands that being successful is the most important thing in the world -- so long as SHE is not more successful than him -- and will reward his hard work in the office with sexual favors at home whenever he's got a spare moment. The opposite of The Hero [see No. 6 below], he wants someone who does not need him emotionally at all.

What he really needs: To realize that a fulfilling life is all about balance and an amazing career doesn't keep you warm at night.

6. The Hero: He loves to date a basket case, a woman who's got many issues for him to help her overcome -- but that's only so he can avoid dealing with his own. Once she's more stable, the skeletons in his emotional closet emerge and he has to find someone new to save instead.

The woman he wants: A woman who "needs" him and makes him feel strong, capable, manly, and, most of all, NOT CRAZY in comparison.

What he really needs: To find a therapist who can hold up a mirror and show him that his own problems should take top priority.

7. The Tragic Tom: Tragedy has befallen him and he hasn't been able to recover. While being sympathetic to this guy's plight is understandable, trying to save him is a waste of time.

The woman he wants: A woman who will see his gooey marshmallow center underneath that hardened edge and will exhaust herself trying to save him from himself.

What he really needs: To gain perspective and to learn, on his own, that bad things happen to everyone in some form and the best you can do is move forward in your life with lessons learned.

The Frisky: Why these celebrities decide to cheat

8. The Commitment Phobe: This guy pretends to be happy on his own, living large as a bachelor, just like his hero George Clooney, but he's actually just terrified of letting a woman get to know the real him.

What he really needs: To face his insecurities head on, so he can figure out what he's so scared of showing to other people and to get over it.

9. The Eternally Brokenhearted: He hasn't gotten over the chick who broke his heart and he holds what she did against every other woman he dates in subtle ways.

The woman he wants: Someone who reinforces his anger at his ex by committing the same "sins" she did. That way he can punish her for his ex's actions. Unfortunately for both of them, he'll never be able to work through his anger completely with that kind of black-and-white attitude in which he's the sole victim.

What he really needs: To find closure with the woman who "wronged him," but not necessarily through confrontation. Rather, he needs to look at the demise of the relationship objectively so he's forced to acknowledge his role and can move forward in a new relationship with no (or minimal) baggage.

The Frisky: 8 celebs who were Hooters girls

10. The Eeyore: Thanks for noticing him, the dull, pathetic, dude in the corner who is not actually dull and pathetic. He just has the worst attitude of all time. He's always whining about something. Every day is a bad day. Nothing ever works out for him. Everything seems completely impossible to The Eeyore, which makes being around him unbearable.

The woman he wants: His own personal Pooh Bear. That special someone who will be his personal cheerleader and spend all of her time trying to get him to look on the bright side even though he is completely incapable of seeing life that way.

What he really needs: To stop feeling sorry for himself and take responsibility for what happens in his life. The sooner he realizes that life is what you make it, the sooner he'll have some much-needed company in his bed.