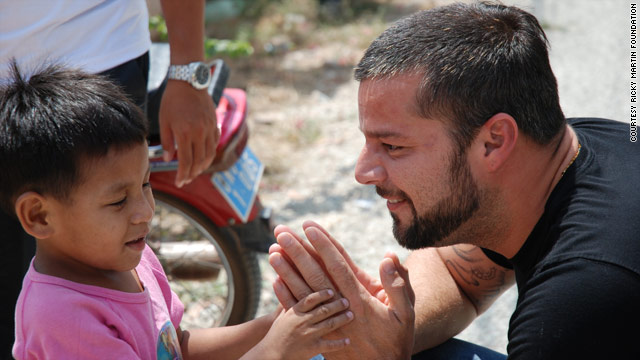 Ricky Martin started his foundation to advocate for children around the world.
STORY HIGHLIGHTS
RELATED TOPICS

Editor's note: Voting is under way for the 2010 CNN Hero of the Year. The winner will be announced at "CNN Heroes: An All-Star Tribute," which airs Thanksgiving night, November 25, at 8 p.m. ET. See the top 10 CNN Heroes of 2010 and and cast your vote.

(CNN) -- Grammy Award-winning artist Ricky Martin has long been passionate about helping others, serving as a UNICEF goodwill ambassador and working with Habitat for Humanity.

But his main charitable focus is the Ricky Martin Foundation, which he founded to advocate for children around the world.

This year, Martin served on the Blue Ribbon Panel that selected the Top 10 CNN Heroes of the Year. He recently spoke to CNN about the Heroes campaign and his philanthropy. Below are excerpts from that interview.

CNN: What's the mission of the Ricky Martin Foundation?

Ricky Martin: It's about children. It's about being their voice. Our mission is to advocate on behalf of children's rights and their well-being in three crucial areas: education, health and social justice.

Through our principal project, People for Children, we combat child exploitation that results from human trafficking -- modern-day slavery. Children aren't just our future. They're our present. Unfortunately, there are children around the world that are being forced into slavery. I've heard those testimonies, and if we don't do something about it, we're allowing it to happen at this point. So it's been almost 10 years of intense work educating the world about this. Little by little, we're trying to create awareness that this goes on.

CNN: Do you have any anecdotes about your work with your foundation? Maybe someone your organization has helped that you're particularly proud of?

Martin: I have many, but rescuing three girls from the impoverished streets of India in 2002 ... was a rude awakening into the reality of human trafficking. It gave me the courage to establish People for Children, and drew the route to my path as an activist. And just recently listening to a boy who has been empowered by our anti-trafficking and leadership seminars, saying he wants to be a teacher for other children, was uplifting. These are moments of grand simplicity and profound awareness.

CNN: Why is philanthropic work important to you, and how has it changed your life?

Martin: I am convinced that music, like philanthropy, bridges hope. Once you learn about this heinous crime, you cannot turn a blind eye. Knowing that we have prevented children from falling prey to modern-day slavery or that a life was saved by our awareness efforts is invaluable to our mission and human spirit.

CNN: What was it like being on the Blue Ribbon Panel that selected the Top 10 CNN Heroes?

Martin: It was a very humbling experience. Their stories served as inspiration, and they also weave a canvas that [shows that] in spite of injustices, there are many warriors of light that make our world a better place.

CNN: The CNN Heroes campaign honors everyday people doing extraordinary things. Why do you think it's important to honor the work that these individuals are doing?

Martin: Kudos to CNN for honoring the work that human beings are doing around the world, because [these Heroes] are "little gods," as I call them. They are making miracles with nothing. They are creating such a beautiful impact on different lives.

CNN: What is a hero to you? What are the qualities of a hero?

Martin: Heroes represent the best of ourselves, respecting that we are human beings. A hero can be anyone from Gandhi to your classroom teacher, anyone who can show courage when faced with a problem. A hero is someone who is willing to help others in his or her best capacity. It can be someone teaching another to write, saving someone in danger or giving up your life for another. Amongst the qualities a hero should have, I would include determination, loyalty, courage, perseverance, patience, focus, intrepidity and selflessness.

CNN: Why is important for people to give back?

Martin: It nourishes your soul and enhances the meaning of life.