It's really NOT him, it's YOU 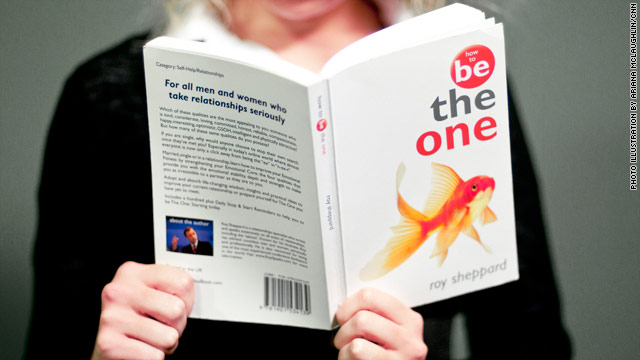 Roy Sheppard says a fish adorns his book as a reference to the advice, "There are plenty more fish in the sea."
STORY HIGHLIGHTS

(CNN) -- Scary thought -- with more than 98 million single people in the United States alone, you're simply one of many fish in the sea.

Even scarier -- after years of searching for that special someone, "The One" might reject YOU because you're not "The One" for them.

British relationship expert Roy Sheppard has a new book, "How to Be The One," explaining how to strengthen your emotional core through four pillars -- self esteem, attitude, happiness and kindness/compassion -- in order to make sure you're ready for that moment.

"Thanks to the internet, there's now a new addiction... dating," he said. "It's never been so easy to get a date. But with so many people to choose from, there's always the possibility that there's someone out there who's 'better.' "

Sheppard says that if you focus on improving each pillar, you'll have a better chance of catching "The One's" attention when they meet you. Before you become, as he writes, the ex in "next."

"There's always the possibility that there's someone out there who's 'better.'"
--Roy Sheppard

The following is an edited interview with the author:

Sheppard: There are LOADS of books around that teach you how to get a date or find "The One." Yet men and women are still searching.

Being "The One" doesn't ever involve being manipulative or deceitful to trap your target into a relationship. It's about being a decent human being and a trustworthy, committed best friend. You can't fake that.

The book focuses on helping men and women recognize how to be a genuinely appealing person for a long-term, happy relationship with someone else.

CNN: Sum up the book for us in a sentence -- how does someone become "The One"?

Sheppard: By choosing to be a more appealing person on the inside, learning the skills to acquire a healthy self-esteem, a great can-do, supportive attitude, an inner happiness that's not dependent on anyone else "completing you."

CNN: Not to stereotype, but I rarely hear guys say "The One" in a serious context. Do you think many men will read the book? 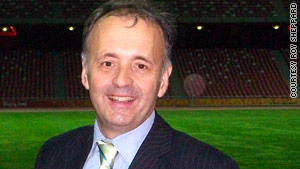 Roy Sheppard is a relationship specialist and experienced conference facilitator.

Sheppard: Most relationship books are written by women for women. In many cases they complain that men don't "get it" about relationships. The only problem is they don't invite men to be a part of the conversation.

If you're a woman, why not mention this topic to guys. Ask them "What would YOU do to be 'The One' for someone else?" If their eyes glaze over and they're not at all interested in even talking about it, it could be an early indication that a long-term relationship isn't part of their agenda.

CNN: Of the four emotional core pillars, which is most important and why?

Sheppard: That's a bit like asking "Which muscle in your leg is the most important? They are all important -- especially when they work together. Improved self-esteem leads to a more appealing attitude, which helps us all become happier people. It's only when you're happy can you be a kind person. As I write in the book, it is impossible to be unhappy and loving at the same time.

CNN: You say in the book that dates are auditions for intimacy. What does that mean?

Sheppard: I've defined dates as "auditions for intimacy" because if you think about it, that's precisely what dates are. When people date they assess whether they might want to be intimate with that person -- this week, month, year or for decades.

Invest time developing your emotional core. You'll pass more "auditions," which will open up far more options to you. You'll be able to share the limelight with an A-list partner in a blockbuster relationship, rather than a low-budget soap opera.

CNN: You speak a lot about honesty, playing games and faking it. What's the bottom line there?

Sheppard: Manipulation or game-playing is for desperately deceitful people who have convinced themselves that there's a shortcut to a long relationship. Long-lasting, happy and intimate relationships are always based on mutual honesty, respect, trust and commitment.

CNN: What are the biggest complaints you hear from men about women and from women about men?

Sheppard: Some men and women spend their entire lives insisting that they "see the manager." It's their default setting. Nothing is EVER right for them. They have a problem because invariably they have created what they think the scenario should be in their heads, then when reality fails to conform to that, they kick up a fuss about it!

"It is impossible to be unhappy and loving at the same time."
--Roy Sheppard

As far as specifics go, it's usually a variation on "He/she won't do what I want." This is what I describe in the book as "first position" thinking. Successful relationships are based on "second position" thinking and behavior. Second position is having the capacity to experience what it would be like being that other person.

CNN: Throughout the book you talk about how no one else is responsible for how you're feeling, your attitude or your love. Why is that?

Sheppard: So many people allow their downbeat emotions to dominate their lives. Human beings are much bigger than that. We can consciously decide how happy we are going to be. It's a decision -- give it a go.

Someone who learns to think like that becomes more appealing to others ... and themselves.

CNN: Once you've found "The One," how do you keep them?

Sheppard: A flippant answer would be -- you don't. THEY decide to keep you.

In order to be someone a partner would choose to keep, you need to build up, over a long period of time, proof that you are dependable, considerate, reliable, supportive, kind and loving. This happens as a direct result of developing your emotional core.

It's just like a career. Some people take their careers seriously, others don't. Those who want a successful career work towards acquiring the necessary skills to be the best they can be. They prepare for their interviews (or auditions!) and work hard. Those who can't be bothered don't get the best jobs, are forced to accept poor pay, and if over time they shirk their responsibilities, they usually get fired.

A successful, long-term relationship requires effort from both parties. Every day.

CNN: Why is there a goldfish on the cover of your book?

Sheppard: Whenever you break up with someone, invariably a well-meaning friend will say "Cheer up, there are plenty more fish in the sea." That may be the case, but you want to be the only ONE fish!

So many female friends tried insisting that the cover had an image of a swan or a pair of love birds because they all mate for life. But no guy is ever going to read a book on the subway with love birds on the cover! It therefore had to be something that was gender neutral.