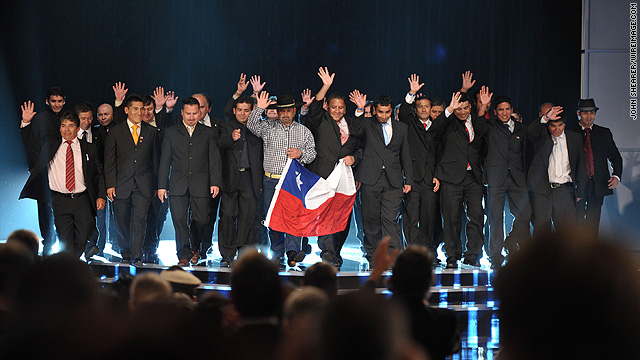 Los Angeles, California (CNN) -- The Chilean miners who were rescued last month after nearly 70 days underground were saluted with a standing ovation at the start of "CNN Heroes: An All-Star Tribute."

The 33 men appeared on stage, with five of their rescuers in the front row, at the Shrine Auditorium in Los Angeles. CNN brought the group to the United States to attend the gala event, which recognizes the top 10 CNN Heroes of the year.

"For 69 days we were amazed by these 33 brave miners," CNN's Anderson Cooper said in welcoming the miners onto the stage. "Their ordeal was unthinkable; their rescue, unbelievable. No one has ever been trapped underground so deep for so long and survived.

"They endured a nightmare, experienced a miracle, and in the end became each others' brothers and heroes."

The five rescuers were selected to represent the many thousands whose talent and effort led to the dramatic rescue.

The tribute show, taped November 20, premiered worldwide on Thanksgiving night. CNN Heroes -- everyday people who are changing the world for the better -- have been profiled weekly on the network since January. They were chosen from more than 10,000 nominations submitted by viewers in 100 countries.

A blue-ribbon panel of judges, including Muhammad Ali, Sir Richard Branson and Yo-Yo Ma, selected the top 10 Heroes, who will each receive $25,000 for their cause. An additional $100,000 will go to CNN Hero of the Year Anuradha Koirala, who was revealed at the end of the tribute show Saturday night. The Hero of the Year was selected by the public in an eight-week online poll.