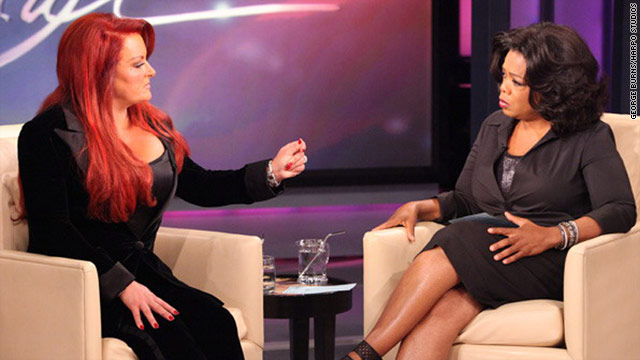 Wynonna Judd: "I just had to have faith and believe in someone else because I didn't believe in myself."
STORY HIGHLIGHTS

(Oprah.com) -- Through the years, Wynonna Judd has publicly shared her most painful struggles. "People walk up to me in airports and say, 'Why did you put your dirty laundry on Oprah?' I said, 'Because I want to be a teacher,'" she says. "I'm willing to teach through my mistakes and my victories."

Now, Wynonna hopes to help others by sharing how she survived an unimaginable betrayal. In 2007, Wynonna's then-husband, Daniel Roach, was convicted of attempted aggravated sexual battery against a minor.

Wynonna says she was in a public place when she first learned of Roach's arrest. "I'm literally in an airport on a golf cart, and people are pointing at me, 'Oh, she's the girl on the 5 o' clock news.'"

Once home, Wynonna says she went into "mama bear mode" with her own children, Elijah and Grace. "He was out of the house within the hour," she says. "I called him everything I could think of. I had a moment where I let it all fly, and then it was done."

Five days after Roach's arrest, Wynonna filed for divorce from the man who had once been her bodyguard. The ordeal, Wynonna says, broke her wide open.

"I trusted him with my life, and I didn't want to stop trusting [people]," she says. "It's a little tough because once burned, forever fears the fire. I didn't want to be hell hath no fury like a woman scorned."

Though she'll talk about her own pain, Wynonna says she's reluctant to speak about certain aspects of the case out of respect for the child involved. "This story is so deep and wide. There's more to it than I can tell you," she says. "Because of the child, I won't speak about it. It's their story [to tell] when they're ready to talk."

Still, she admits she did know the child. "That's what's so scary is that it is someone that you know," she says. "There's a trust there. There's a bond."

Wynonna says she's had to step back from the child and his or her family since the incident. "They're in the [healing] process, and it's none of my business," she says. "I had to separate from it or it would have killed me. I literally had to physically, emotionally and spiritually literally place them at the feet of Jesus."

Wynonna says she was determined to become better, not bitter, after her divorce. "When I got really alone, my life coach said: 'You'll think you're going to die from crying of a broken heart. And if you'll let yourself lean into the pain, you'll wake up one day and you'll stop crying and you'll move forward,'" she says. "I just had to have faith and believe in someone else because I didn't believe in myself."

Wynonna says Roach struggled with addiction, and her family had to learn to heal from that. "That saved me, making sure that my children, that we, could break the cycle of addiction," she says. "It's baffling. It's cunning. We are not our diseases."

According to Wynonna, Roach is in recovery. "He's sober, and that's what matters to me now."

In the end, Wynonna found strength in focusing on what was best for her and her children. "The best revenge is living well," she says. "I cleaned out my house, got rid of everything that reminded me of him."

Forgiveness, she says, is an ongoing process. "[I] haven't forgotten, but I have forgiven. Enough that I humanly can," she says. "I don't wish him dead or anything like that. I just wish to be one of those people that doesn't spend my life being defined by that."

Today, Wynonna is lighter both mentally and physically. She's lost 60 pounds by taking things one step at a time. "In my darkest hour, I had a choice to make: I can be a victim or a victor. And I just started walking in the wilderness and screaming at God, 'Why?'" she says. "I just kept walking, and next thing I know, I like to walk. So I call it meditative walking versus 'I've-got-to-be-in-the-Olympics' or 'get-back-to-my-original-weight-of-8-pounds-15-ounces' [walking]."

As a result, Wynonna's loving her spirit and her body. "Let's just put it this way: I don't look in the mirror and go, 'You suck,'" she says. "The other day, a guy half my age asked me out, and I said: ''I admire your courage, but you're not showing good sense. I could eat you up alive.'"

Wynonna says she's finally putting herself first. "I feel like I finally got it. I turned 45, went through a horrible divorce," she says. "I lost my family and I gained myself because I was all alone with God."

Wynonna says she's also found balance. "I just started to say no, which was painful. I started to work less," she says. "And I'm making more because I'm making decisions based on faith, not fear."

Her need to please is also a thing of the past. "I don't have to solve everything, and I don't care as much if everyone loves me," she says.

Instead, Wynonna enjoys the present. "Before I came [onstage], I stopped and I looked around. I paid attention to my environment and where I'm at," she says. "I'm not so hell-bent on the destination. I know it's a journey. I'm in a really good place."

Oprah.com: A retrospective of the Judds' family