Should you tell spouse everything? 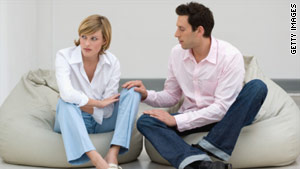 Experience teaches some couples what they should or should not talk about, therapist says.
STORY HIGHLIGHTS
RELATED TOPICS

(OPRAH.com) -- I have two friends, a long-married couple, whose bathroom features face-to-face toilets. To hear them tell it, they generally start the day there together, trading plans, opinions, and last night's dreams.

Personally, I never felt the need to be quite that close. But I do admire this couple's openness. By any measure, my friends have a very good marriage, but my own yardstick of their love is this utter willingness to show themselves to each other.

Still, I know for a fact that even these two hold something back.

Holding back in marriage would seem to have a lot to commend it. Philip Roth, of all people, says, "You can tell the health of a marriage by the number of teeth marks on your tongue."

Admittedly, Roth is not the poster child for intimacy, but my own grandmother advised repeatedly, "Bite your tongue," and she managed 53 years with the same husband (though they were threatening divorce right up to the nursing home). Roth and my Nanny are essentially on the same page.

Twenty-five years as a couples therapist has put me reluctantly on that page also. In too many sessions I have winced inwardly at an exchange or suppressed the shocked outcry of "You said what?!" at a marital report.

Too many times I have been unable to repair the damage inflicted by a heartfelt confidence: "I finally told him his penis is too small. How else could he understand why I don't enjoy sex with him?" "She needs to know she's too fat to turn me on anymore. It's the truth and maybe it will motivate her." "I love him but I'm not in love with him. I just can't get past his looks."

I think of these forthright remarks as disguised emotional muggings, and plenty of that goes on in the name of honesty. But even truths shared in a genuine effort to unburden one soul may simply pass along the pain to the other, like some marital game of emotional hot potato: I felt bad about the affair, about the money, about what I said to your mother, but now I'm cleansed and you feel bad, till you tell me a truth and pass it back. As the hired healer observing this volley, teeth marks on the tongue would seem to be evidence of progress.

But it is progress at a price. There is an opposite take on love and honesty, a viewpoint to which Roth and Nanny and I no longer subscribe, but one for which I still cherish a secret longing. It says the ideal is the kind of no-holds-barred intimacy that my friends the cheerful toilet talkers come close to realizing.

Plain and simple, intimacy is self-disclosure. You are intimate with someone to the degree that you reveal your hidden self, including what you think and feel as well as what you've done or experienced. The comfort, the relief, the sheer pleasure of revealing yourself, and if you have chosen your audience well of being understood and uncritically accepted is enough to explain why intimacy is the Holy Grail of relationships.

From childhood on, we hope to have a best friend, a person to whom we can open our hearts and who will value us enough to risk equal self-disclosure. We imagine we'll have enough in common to make our time together joyful, and enough affection to make our differences tolerable. When it is time to marry, we carry this friendship model forward, throw in sex and money, and there you have it: the dream of perfect intimacy.

Oprah.com: Is your marriage good enough? 10 questions to ask

Well, naturally it is the sex and money that complicate things -- that and sharing a bathroom, inheriting in-laws, and conceiving children. Close friends can agree to differ on child rearing and may even find each other's point of view stimulating. Coparents have to reach a consensus and are apt to find differing points of view alarming. Best girlfriends can trade sexual secrets. Spouses who trade sexual secrets in the spirit of friendship might end up with three in the bed.

In the end, I believe, the intense physical, familial, and financial intimacy of marriage must be balanced by a restraining emotional hand in order to protect some of the illusions necessary for love. At the same time, every untold truth creates a small barrier between you. The best-case scenario might be to marry a person to whom you could say anything and then exercise some care in what you do say. The question is, Which secrets make a marriage more loving? And how do you distinguish them from the secrets that stem from sheer self-interest?

Much of what we conceal from our lovers is the stuff we're trying to get away with, exactly in the way and probably to the degree that we deceived our parents as children. The content of these deceptions varies from couple to couple. Interestingly, little of it is monumental. If infidelity is the traditional marital secret, I hear more about the painful day-to-day duplicities people employ to avoid conflict or to maintain control.

In my practice I've heard spouses lie to each other about whether she had dessert, if he remembered to call the insurance company, how much TV she allowed the toddlers, the cost of his basketball tickets, the number of drinks she had, and what he actually said to his boss. Few, if any of these, are lies you'd tell your best friend. In fact, if you felt compelled to distort or disguise your life for someone's approval, you would probably not regard that person as a close friend at all.

Oprah.com: The fight that can save your marriage

Each petty lie in a marriage nicks intimacy and frays trust. As psychiatrist Frank Pittman famously stated, infidelity is not "whom you lie with. It's whom you lie to." However trivial the distortion, every time you mask yourself to avoid conflict, you take a small step away from your partner. Emotional distance does not foster great love.

But irritated husbands do not make great lovers, either. You are two separate humans and some of what you each do will inevitably infuriate the other. There is a definite argument to be made for shielding your mate from the parts of yourself that he or she finds most difficult to love. It's a tortuous road to the total, loving acceptance of soul mates. Few get there, but the couples I've seen who go furthest had a little judicious padding along the way.

So I do think husbands who have issues with money sleep most peacefully when they don't know what you spent on your shoes, particularly if you earned that money yourself and it's yours to manage independently. And I think wives with shaky sexual confidence might be spared the anecdote about the flirtatious seatmate on the plane. Yes, in both cases you are withholding information that you might enjoy discussing with a friend, but you are doing it in recognition of a partner's soft spots, balancing the pleasure of sharing your experience with its painful potential. That kind of emotional accounting makes sense.

But if you are stealing cash from your husband's pants pocket and routinely hiding purchases in the back of the closet, you are not employing tact; you are sneaking around like a guilty child, and that has never improved a marriage. If you habitually withhold the airplane stories in order to hold open your options for follow-up, this is not sensitivity, it's betrayal. You know the difference.

Only a few of the couples I've seen are gratuitously cruel, and most have established some idiosyncratic balance of what can and cannot be shared, if only because years of catastrophic discussion have taught them where they must not go. She knows she cannot frankly discuss his daughter or that any modest inquiry into his business will be heard as intrusive and controlling. He learns that playful sexual fantasy shuts her down completely or that even mildly negative feedback is received as a critical assault.

Devoted couples keep some secrets that are a pure expression of love. She tells him he's a great cook because this lie makes him absurdly happy; he lies and tells her she doesn't look fat because she needs the confidence boost.

Each tells the other that he or she is desirable and beloved and omits the weeks of sexual fantasy about the next-door neighbor or the new associate. She thinks his speech was labored but tells him he was a star. He doubts she'll get the job but cheers her on and stifles his uncertainty. She feels he made a total ass of himself but merely mentions he was out of line. He thinks she is a political idiot but respects her right to airtime.

What's required is a delicate equilibrium between openness and gentleness -- and on this tightrope there are any number of places to trip. You get closer to each other as you show yourselves more and more clearly, but if you say it all you'll do some damage. You grow loving as you treat each other more and more kindly, but if your marriage requires too many silent subjects then you sacrifice intimacy at the altar of surface tranquility, and love dies. At the extreme, the marriage becomes a facade sheltering parallel lives with joint bank accounts.

The decision to withhold or to reveal puts you in judgment's gray zone, where, after all, most long-term relationships live and die. Few people who live in glass houses stay married for long. Ah, but those few who do are very blessed indeed.