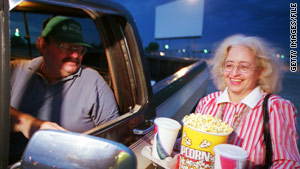 (CNN) -- Movie audiences have always known the joys of in-seat snacking, but it took the theaters a while to come around.

Owners of nickelodeons and movie palaces refused to sell food until the 1920s, according to "Shared Pleasures," a history of movie presentation by Douglas Gomery. Munching on peanuts and popcorn during a show was low-class, they believed, associated with the circus and the burlesque house. The wonderful new art of the cinema needed a refined atmosphere, more like the concert hall than the carnival.

Of course, people ate anyway. As each new theater opened, candy stores and street vendors set up shop nearby, selling bags of treats to be smuggled past the ushers.

It took the Great Depression to loosen the owners' scruples. Andrew F. Smith's book "Popped Culture" details the way movie theaters got into the popcorn business.

Looking for extra revenue streams, the theaters began leasing space to vendors: prime locations right next to the box office, or even "lobby privileges" for a dollar a day. When they saw the kind of profits the popcorn sellers were turning, they took over the stands themselves. The movies turned popcorn into a snack phenomenon: 5 million pounds were grown in the United States in 1934, 100 million pounds in 1940.

The owners also realized that setting up candy counters and staffing them with high school students (preferably female and pretty) was an easy way to turn a buck, and all the new brands of packaged candy made their way into theaters.

Soft drinks showed up via the Coca-Cola company. After World War II, salesmen traveled the land, setting up soda stands at movie houses throughout the country. With more and more independent theaters opening (A 1948 antitrust ruling forbade Hollywood studios from running their own.), owners looked to the refreshment stands as a way to cover the cost of renting films.

Trying to sell more snacks, they instituted intermissions in the middle of films and commissioned cartoons of singing, dancing treats to push the goods.

Art houses, showing foreign films to an urbane crowd, began to pop up in big cities and university towns in the late '40s. As historian Barbara Wilinsky points out in her 2001 study "Sure Seaters: the Emergence of Art House Cinema," the new highbrow theaters tried to distinguish themselves from mainstream joints by serving coffee and pastries: more intellectual fare, apparently. The arty Trans-Lux chain even set up faux-Parisian "street" cafes in some of its branches.

In most of the country, though, the drive-in ruled. With more space available, the menu expanded: hot dogs, burgers, even barbecue and fried fish sandwiches were offered to car-bound audiences. (Folks in Texas got pickles, which are still served there today.)

The late '70s saw the death of the drive-in and the neighborhood theater as more multiplexes opened. On the food front, the bold invention of the era was snack counter nachos. Introduced by Frank Liberto at a Texas Rangers game in 1977, chips with gooey "cheese" soon moved from stadium to multiplex lobby. Liberto's company, Ricos Products, is still the leader in the field, selling orange goo and orange-goo-dispensing equipment to theaters from China to Dubai.

Another company, Taste of Nature, founded in 1992 by two business school graduates, also broadened the movie snack menu. They're the people who brought those bulk bins of yogurt pretzels and gummy candies to lobbies everywhere. Their original goal was to offer healthy alternatives to the usual snack counter candy, but they discovered that people weren't quite ready to give up the junk.

Health was on people's mind in the '90s however: A1994 report by the Center for Science in the Public Interest broke the news that a large movie popcorn had as much saturated fat as six Big Macs. Sales dipped -- just a bit ­-- and many snack counters started using slightly more healthy canola oil rather than coconut.

The latest trend is theaters offering "luxury" options: premium screening rooms with cocktails, wine lists and upscale menus. At the Gold Class Cinema in Redmond, Washington, you can get $17 crab cakes to nibble while watching the film.

Florida's CinéBistro chain offers Asian mojitos and bottles of Veuve Clicquot (straw not included). It seems some theater owners are still hoping to create that refined atmosphere they longed for a century ago. Popcorn, though, is not going anywhere.