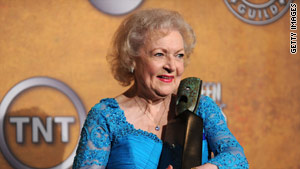 (Mental Floss) -- Between her Snickers Super Bowl ad and the petition to have her host "Saturday Night Live," Betty White has been getting a lot of press lately.

She's been in the business since the 1940s, so you can bet Betty has a few interesting stories up her sleeve. Wouldn't you just love to sit at the kitchen table and eat late-night cheesecake with her?

Here are a few of the tales she might tell.

1. Like many other celebrities, Betty graduated from Beverly Hills High School. Class of '39!

2. Don't call her Elizabeth -- it's not her name. Her parents went with "Betty" on her 1922 birth certificate because they weren't too keen on any of the other nicknames that can go along with Elizabeth.

3. One of her first gigs was as a disc jockey (kind of). She was the assistant to Al Jarvis, who hosted a program called "Hollywood on Television", a variety show that included playing records just like a radio disc jockey did. Betty was Al's right-hand woman for a few years in the '40s and ended up taking over the show entirely when he left.

When our favorite show about sassy elderly women first came on the scene, though, television audiences were most familiar with Betty as the tart-tongued, man-hungry Sue Ann Nivens from "The Mary Tyler Moore Show." In fact, she was initially offered the role of similarly insatiable Blanche Devereaux because of her previous role as Sue Ann.

At the first table reading for the show, Rue and Betty switched characters to avoid being typecast (Rue had previously played a sweet, naïve, Rose-type character) and the rest is TV history.

5. She's been calling the shots since a time when women didn't get to call the shots very often. Betty received credits as co-creator, producer, and star of the 1952 sitcom "Life with Elizabeth." The show earned Betty her first Emmy -- Outstanding Lead Actress. She wouldn't see another one until 1975, when she won for Outstanding Supporting Actress for her role in "The Mary Tyler Moore Show."

6. You probably don't want to have her over for game night, unless you don't mind losing. In the '50s and '60s, Betty was known as "The First Lady of Game Shows" thanks to her appearances on "Password," "What's My Line," "To Tell the Truth," "Match Game" and "Pyramid."

7. In fact, she even married a game show host. She met her third husband, Password host Allen Ludden, during a guest appearance. If you're familiar with Ludden, you know he later started his shows with the trademark phrase, "Hi, Doll." This was his little nod to Betty's mom, Tess, who was an avid watcher. Betty and Allen were married from 1963 until his death in 1981.

8. She might seem sweet, but White has a wicked sense of humor.

When fellow Golden Girl Rue McClanahan was hospitalized after having a stroke earlier this year, a friend of Rue's reported that Betty had sent a "Don't Get Well" card that said something along the lines of, "Dear Rue, I hope you hurry up and die so I can be the last Golden Girl left. NOT KIDDING." Rue apparently got a huge kick out of it.

Mental Floss: 7 things to know about "The Golden Girls"

9. Another example of Betty's not-so-sweet humor: if you ask her if there's anything she hasn't done in her career, her stock reply is, "Robert Redford." She's confessed that she's never actually met him and would now be embarrassed if she did.

10. Despite all her success in the television and film industries, Betty has said that when her time comes, she would rather be remembered for her work with animals and animal-related charities. But don't call her an activist! Here's what she has to say about that:

"I don't get into the political side or the demonstrative side. I'm just totally devoted to health and welfare. You know what the problem that animal activists sometimes have? They only concentrate on the heartbreaking things to the point where the general public think, 'Oh, here comes those animal folks again and I'm going to hear all the things I don't want to hear.' They forget to celebrate all the gains that we've made. ... Sure, there are still big problems, but we're making some good moves. I'm a big cockeyed optimist. I try to accentuate the positive as opposed to the negative."