By Steve Rushin, Special to CNN 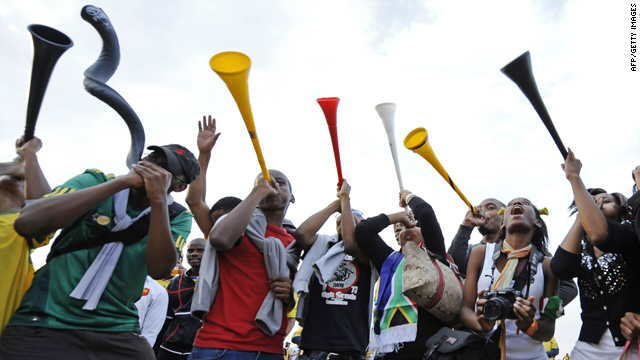 Fans play the vuvuzela at South Beach in Durban, South Africa, on June 11, the first day of the 2010 World Cup tournament.
STORY HIGHLIGHTS

Editor's note: Steve Rushin, a former Sports Illustrated writer, is the author of a new novel, "The Pint Man," published by Doubleday. Visit his website at http://www.steverushin.com/ or follow him on Twitter.

Hartford, Connecticut (CNN) -- If you have a TV you have heard, or heard of, vuvuzelas. They're the cheap plastic horns played by tens of thousands of spectators in World Cup soccer stadiums in South Africa and buzzing like so many unswattable mosquitoes in the ear of an irate camper.

To hear most viewers tell it, "vuvuzela" -- like "abattoir" -- is a beautiful word for an ugly thing. The horns drone for the entire 90 minutes of every game, and that is the perfect word for what they do: drone, like the male bee that does no work -- idling pointlessly, unproductively, infuriatingly, to no end. Or so say the multitudes that now watch the games with the sound muted.

I've tried muting the TV. The vuvuzelas still ring in my ear long after the sound is turned off and even after the game has ended. The world of sports has given us swimmer's ear, tennis elbow and athlete's foot. Here, at last, is an affliction named for the spectator at home: couch potato's tinnitus, turning every World Cup fan into a Metallica roadie.

There is no clear etymology for the word vuvuzela, but my guess is it derives from the Latin "vuvu" (blood) and "zela" (issuing from both ears). The buzz it has created for the World Cup is not the kind FIFA intended.

TV viewers and newspaper writers this week have demanded that vuvuzelas be banished from South African stadiums for the monthlong tournament. They argue that the horns drown out singing and chanting, the traditional soundtrack for soccer. To read the editorials, you'd think that the Vienna Boys Choir has been serenading Manchester United and Liverpool when they play each other in the English Premier League.

I've been to plenty of English, European and World Cup matches. Many of the songs and chants now being drowned out by the vuvuzelas are in far worse taste than the plastic horns. Trust me. They make the vuvuzela sound like Louis Armstrong playing Gabriel's trumpet on a cloud in heaven.

Perhaps it's the Stockholm Syndrome, but I've grown to like the vuvuzela, for any number of reasons. With the 2010 World Cup, the vuvuzela joins the ticking stopwatch on "60 Minutes" and the piercing signal of the Emergency Broadcast System in the pantheon of nonmusical sounds that instantly tell you what is on TV even before you've entered the room.

It denies us tranquility, sure, but the vuvuzela is a little bit like tranquility: a beautiful word for a beautiful thing. Long after the World Cup final is played on July 11, the sound of the vuvuzela will remain instantly evocative of South Africa -- as the didjeridoo is to Australia, the bagpipe is to Scotland or the car horn is to New York City.

And even if I didn't like the vuvuzela, I would keep my objections to myself. It isn't polite to tell another country how to watch a soccer match. The sound that issues from the vuvuzela is cacophonous -- joyful and infuriating at the same time. It calls to mind mosquitoes on a continent tragically ravaged by those malaria-bearing insects.

For better and worse, the vuvuzela is the sound of South Africa. As Charlie "Bird" Parker said: "If you don't live it, it won't come out your horn."

The opinions expressed in this commentary are solely those of Steve Rushin.