Why Western-style democracy is not suitable for Africa 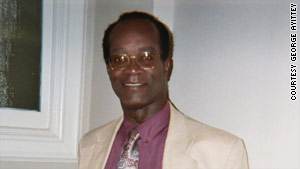 Editor's note: George Ayittey is a Ghanaian economist and the author of several books on Africa, including "Africa Unchained" and the forthcoming "Defeating Dictators in Africa and Around The World." In 2008, Ayittey was listed by Foreign Policy magazine as one of the "Top 100 Public Intellectuals" of our time. He writes for CNN as part of Africa 50, a special coverage looking at 17 African nations marking 50 years of independence this year.

(CNN) -- Western-style multi-party democracy is possible but not suitable for Africa.

There are two forms of democracy. Democratic decisions can be taken by majority vote, which is the Western form. It has the advantage of being transparent, fast and efficient. But the downside is that it ignores minority positions.

The alternative is to take decisions by consensus. This has the advantage of taking all minority positions into account.

However, the demerit is that it can take an awfully long time to reach a consensus the larger the number of people involved. Nevertheless, the Nobel Peace Committee and the World Trade Organization (WTO) all take decisions by consensus.

So too do many traditional African societies. Just because a group does not take its decisions by voting does not mean they have no understanding of the essence of democracy.

In the early 1990s, following the collapse of the former Soviet Union, the winds of change swept across Africa, toppling long-standing autocrats.

In our haste to democratize -- and also as a condition for Western aid -- we copied and adopted the Western form of democracy and neglected to build upon our own democratic tradition.

The Western model allowed an elected leader to use power and the state machinery to advance the economic interests of his ethnic group and exclude all others: Kenyatta of Kenya and the Gikuyu, Moi of Kenya and the Kalenjin, Biya of Cameroon and the Beti, Eyadema of Togo and the Kabye, to name a few.

Virtually all of Africa's civil wars were started by politically marginalized or excluded groups.

In the West, the basic economic and social unit is the individual; in Africa, it is the extended family or the collective.
--George Ayittey
RELATED TOPICS

At Africa's traditional village level, a chief is chosen by the Queen Mother of the royal family to rule for life. His appointment must be ratified by the Council of Elders, which consists of heads of extended families in the village.

In governance, the chief must consult with the Council on all important matters. Without this council, the chief is powerless. If the chief and the Council cannot reach unanimous decision on an important issue, a village meeting is called and the issue put before the people, who will debate it until they reach a consensus.

The village assemblies exist among various African tribes including: the Ashanti of Ghana, the Igbo of Nigeria, the Somali, the Tswana of Botswana, the Shona of Zimbabwe, the Xhosa and the Zulu of South Africa.

If the chief is "bad" he can be recalled by the Queen Mother, removed by the Council of Elders, or abandoned by the people, who will vote with their feet to settle somewhere else.

Traditionally, African kings had no political function. Their role was spiritual or supernatural -- to mediate between the cosmological forces: the sky, the earth and the world, each of which is represented by a god.

The king's role is to propitiate these gods and maintain harmony among them. If the sky god is "angry" there will be thunder, heavy downpour, floods, etc. That would mean the king had failed to perform his function and off went his head (regicide).

Africans could have built upon this system. In the West, the basic economic and social unit is the individual; in Africa, it is the extended family or the collective.

Choose the president from this National Council and avoid the huge expenditures on election campaigning that comes with Western-style democracy. Those resources can be better put to development in poor African countries.

Next, let the president and National Council take their decisions by consensus. If there is a deadlock, refer the issue to the National Assembly. This type of democracy is in consonance with our own African heritage.

The opinions expressed in this commentary are solely those of George Ayittey's.