U.S. rises to the occasion in Chile 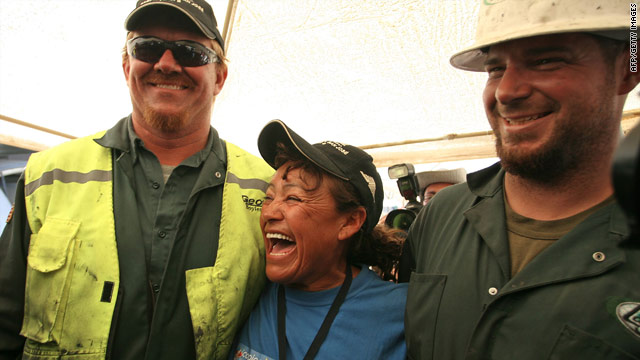 Editor's note: David Gergen is a senior political analyst for CNN and has served as an adviser to four U.S. presidents. He is a professor of public service and the director of the Center for Public Leadership at the Harvard Kennedy School. Natalie Sherman is a researcher for Gergen and an editorial assistant at the Boston Herald.

(CNN) -- All the world is watching, eager to welcome those 33 miners from the pits of hell. It is a tale of courage and resilience that rivals the return of Ernest Shackleton and his men from their ill-fated voyage across Antarctica.

Nearly all the credit belongs to the 33 Chilean men who have survived the ordeal. So, too, should it go to their families and fellow countrymen who have heroically rushed to the rescue.

But even as we wait to see if all men make it safely to the top, it is not too early to salute the Americans who pitched in to help as well with the U.S. technology that proved so vital. After a long dry spell, it is so refreshing to see us at our best again.

The U.S.-Chilean company Geotec Boyles Bros., which operated the first drill to reach the miners, assembled help and materials from across the globe.

In Western Pennsylvania, two companies long-trained by mine collapses in that region rushed to action. They had UPS ship south a specialty drill, capable of creating shafts large enough to fit the men without collapsing, within 48 hours. And UPS did it for free.

Then, working with Chilean crews, Geotec's Kansas-based partner came up with the plan to get the miners to the surface almost two months earlier than the Christmastime date originally projected.

Expert driller Jeff Hart, a contractor from Denver, Colorado, was called from Afghanistan, where he was helping American forces find water, to man the machine. The 40-year-old drilled for 33 days straight, through tough mineral ore, to reach the men trapped more than 2,000 feet below.

His comment after breaking through last week? "We got the job done."

After a long dry spell, it is so refreshing to see us at our best, again.
--David Gergen and Natalie Sherman
RELATED TOPICS

Three NASA doctors have provided advice on how to keep the miners healthy, both physically and mentally. And the design of the rescue pod is the brainchild of NASA engineer Clinton Cragg. Cragg drew on his experience as a former submarine captain in the Navy and directed a team of 20 to conceive of a small 13- foot-long tube to carry the miners one at a time to the surface.

All told, about a dozen Americans decamped to the desert, and many more labored from home, to rescue the miners. The display of generosity and technological ingenuity shows our finest face to the world. Our capacity for problem-solving and helping those most in need of it, sustains the faith that we can, as Hart said, get "the job done."