By Clint Hendler, Special to CNN 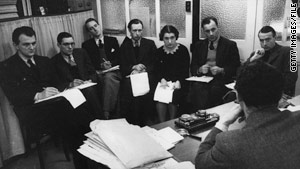 Journalists for a British magazine take part in an editorial conference in 1938.
STORY HIGHLIGHTS

Editor's note: Clint Hendler is a staff writer for the Columbia Journalism Review. You can follow him on Twitter at twitter.com/clinthendler.

(CNN) -- Over the past year, American news consumers have seen the jobs of several major journalists come to an abrupt end after the wide dissemination of their off-the-cuff comments sparked controversy.

This week, it was Juan Williams, cast aside by NPR for saying that seeing people in "Muslim garb" made him nervous on airplanes and made him think they identified "themselves first and foremost as Muslims."

And so again, just as after the departures of The Washington Post's David Weigel, Hearst Newspapers' Helen Thomas, and Octavia Nasr and Rick Sanchez of CNN, we are asking whether Williams, like these others, stepped over some clear firing-offense line that weaves between offensiveness, journalistic impartiality, honest comment and free speech.

Yes, it would be nice if we could trace a simple, bold, straight line among these competing poles, a line that put all of these recent cases on one side. It would make uncertain journalists sleep easier and make news executives' firing decisions simpler.

One refrain common to justifications of the above departures has been the claim that the offending journalist went too far in volunteering his or her own opinion, that they stepped beyond the impartial role that they were expected to fill.

America has probably never had what we've come to think of as an impartial press. Newspapers used to be -- to an extent far greater than what today's most ardent shouters of press bias would insist -- aligned with particular political factions and reported the news so as to benefit their team. One explanation often given for the relatively recent rise of neutrality as a journalistic value is that, by offending fewer and catering to more, newspapers could increase their potential market share and profits.

Another view: NPR was right to fire Williams

Now, journalists -- online, via Twitter feeds, and in an ever-mutating body of cable shows -- are being called on to offer their opinions, for the same basic reason they once stopped: money. Someone thinks doing so is a way to keep an audience attracted in a world of ever-proliferating media options.

They are probably right, and that's not necessarily a bad thing. But it's worth keeping that sort of bottom-line gamesmanship in mind when considering these cases. The clearest connection between the incidents is that, simply put, each organization decided it wasn't worth the trouble to keep the staffer.

The crossed line was between each individual journalist's value to their employer, and the perceived reputational and financial damage the organization anticipated would be forthcoming if the loose-lipped journalist wasn't jettisoned. Pronto.

To pretend that it's a simple matter of expressing opinion, any opinion, is to descend into incoherence and hypocrisy, as some the news outlets have sadly done in the wake of the departures. In the Williams case, take NPR head Vivian Schiller's ludicrous insistence that he had to be fired because "he expressed views ... plain and simple."

He was a "news analyst," so expressing opinions was literally Williams' job, and the many opinions he expressed on NPR's own programs, in his books and in his Fox appearances had not routed him from the network.

The problem has been that Williams and others expressed unpopular or controversial opinions. This is tricky ground to tread, a standard that will inevitably lead to hypocritical and inconsistent decisions made for the sake of avoiding controversy rather than because someone broke some cardinal rule. No wonder news organizations retreat to the old safer, simpler explanation when called to account.

Obviously, there are things that, when said, should end careers. No respectable news organization should employ an unrepentant bigot.

But, for all but a handful of the driest just-the-facts-ma'am reporters, let's get beyond where it's enough to say the reason someone has to go is because they crossed some untraceable line between acceptable analysis and unacceptable opinion. If the former employer can't or won't offer more than that, consumers should be suspicious of the real motives.

The opinions expressed in this commentary are solely those of Clint Hendler.