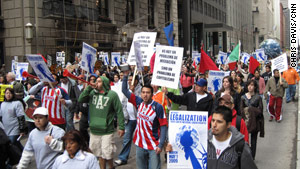 The report by the Center for American Progress and the American Immigration Council estimates that "comprehensive immigration reform that legalizes currently unauthorized immigrants and creates flexible legal limits on future immigration" would yield at least $1.5 trillion in added U.S. gross domestic product over a 10-year period.

"This is a compelling economic reason to move away from the current 'vicious cycle' where enforcement-only policies perpetuate unauthorized migration and exert downward pressure on already low wages, and toward a 'virtuous cycle' of worker empowerment in which legal status and labor rights exert upward pressure on wages," study author Raul Hinojosa-Ojeda writes.

Other groups, such as the Center for Immigration Studies and the Federation for American Immigration Reform, say that unfettered immigration harms the United States and that entry into the nation must remain limited.

When running for president in 2008, Barack Obama said that comprehensive immigration reform would be a priority in his administration, but the issue has been sidelined by health care reform efforts in Congress, the weak economy and the wars in Iraq and Afghanistan.

There are indications, however, that the Obama administration aims to revive immigration reform efforts in Congress this year.

The study bases many of its conclusions on an examination of what happened after passage of the Immigration Reform and Control Act of 1986, which granted legal status to 3 million unauthorized immigrants.

A 2006 Pew Hispanic Center report found that 56 percent of illegal immigrants in the United States in 2005 were from Mexico, a total of about 6.2 million unauthorized immigrants.

About 2.5 million unauthorized migrants, or 22 percent of the total, came from the rest of Latin America, primarily from Central America, the Pew Hispanic Center study found.

The report released Thursday says U.S. enforcement efforts -- mainly along the nearly 2,000-mile border with Mexico -- are costly and ineffective.

"The number of unauthorized immigrants in the United States has increased dramatically since the early 1990s despite equally dramatic increases in the amount of money the federal government spends on immigration enforcement," study author Hinojosa-Ojeda writes.

"Yet the unauthorized immigrant population of the United States has roughly tripled in size over the past two decades, from an estimated 3.5 million in 1990 to 11.9 million in 2008," the report says, noting that illegal immigration appears to have declined slightly since 2007 as a result of the global recession.

The report points out that a long-term study conducted by the University of California, San Diego, found that 92 to 98 percent of unauthorized immigrants keep trying to cross the border until they succeed.

Increased enforcement has several unintended consequences, such as making the Southwestern border more lethal by channeling migrants through remote and rugged mountain and desert areas, the study found. The number of border-crossing deaths doubled in the decade after increased border enforcement started, a 2006 Government Accountability Office report said.

An October 2009 report by the American Civil Liberties Union of San Diego & Imperial Counties and Mexico's National Commission of Human Rights estimates that 5,607 migrants died while crossing the border between 1994 and 2008.

Tightened borders also have created new opportunities for people smugglers, who charged an average $2,000 to $3,000 per person in 2006, the study said. Ninety percent of illegal immigrants now hire smugglers, according to the report.

An examination of trends after the 1986 immigration reform law shows that legalization of unauthorized immigrants has benefits, the report says. Legalized workers earned more, moved on to better jobs and invested more in their education so they could get higher pay and better jobs.

A previous study found that "the wages of unauthorized workers are generally unrelated to their actual skill level," Thursday's report said.

"Unauthorized workers tend to be concentrated in the lowest-wage occupations; they try to minimize the risk of deportation even if this means working for lower wages; and they are especially vulnerable to outright exploitation by unscrupulous employers. Once unauthorized workers are legalized, however, these artificial barriers to upward socioeconomic mobility disappear."

Study author Hinojosa-Ojeda is founding director of the North American Integration and Development Center at the University of California, Los Angeles.

The self-described progressive Center for American Progress is a nonpartisan research and educational think tank headed by John Podesta, who was chief of staff for President Bill Clinton.

The Immigration Policy Center, established in 2003, also is a nonpartisan institute.

The report, titled "Raising the Floor for American Workers, The Economic Benefits of Comprehensive Immigration Reform," can be found on the Web.