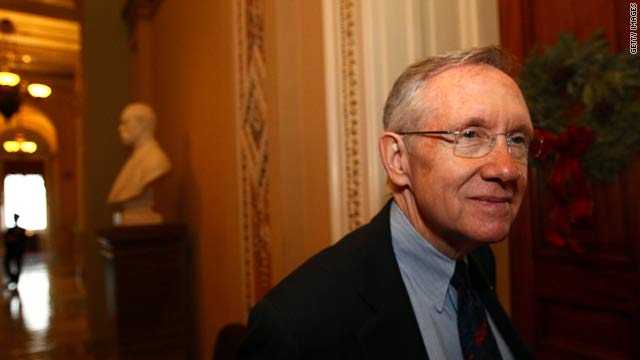 Sen. Harry Reid, D-Nevada, has found himself in political hot water over remarks he made about Barack Obama in 2008.
STORY HIGHLIGHTS

Apex, Nevada (CNN) -- Senate Majority Leader Harry Reid said Monday that he is "very proud" of having told Barack Obama early on that he believed he was a viable candidate for president and could win election.

Responding to the controversy surrounding a newly published remark he made privately about Obama's race in 2008, Reid sought to emphasize his longstanding support for the nation's first African-American president.

"I can still remember the meeting that took place in my office with Sen. Barack Obama, telling him that I think he can be elected president," Reid said.

Obama "was kind of surprised that the Democratic leader was calling this new senator over to suggest that he could be elected president," he added.

A new book quotes Reid, D-Nevada, as saying privately in 2008 that Obama could be successful as a black candidate in part because of his "light-skinned" appearance and speaking patterns "with no Negro dialect, unless he wanted to have one."

Video: Reid: I apologized to Obama

Reid said Monday that numerous prominent African-American officials, including NAACP Chairman Julian Bond and Attorney General Eric Holder, have called him to offer support amid the controversy that began over the weekend.

"I've apologized to everyone with the sound of my voice that I could have used a better choice of words," he said after an event announcing a new energy project in his home state. "And I'll continue doing my work for the African-American community."

Reid said that "as a very young man," he became a leader of civil rights efforts, including the integration of the gaming community.

He added that Interior Secretary Ken Salazar called him to say he should "tell everybody that you have done more for diversity in the United States Senate than all the rest of the people put together."

Asked whether he should apologize to voters, Reid -- who had issued a statement over the weekend apologizing "for offending any and all Americans" -- did not answer directly and instead cited the support he has received from around the country and within his own state.

"I'm not going to dwell on this any more," Reid said. "It's in the book. I've made all the statements I'm going to make."

iReport: What do you think about the words Reid used?

The book he referred to, "Game Change," went on sale Monday. The authors write that "Reid was convinced, in fact, that Obama's race would help him more than hurt him in a bid for the Democratic nomination."

Reid apologized in a statement sent to CNN over the weekend. "I deeply regret using such a poor choice of words," he said.

He added, "I sincerely apologize for offending any and all Americans, especially African-Americans, for my improper comments. I was a proud and enthusiastic supporter of Barack Obama during the campaign and have worked as hard as I can to advance President Obama's legislative agenda."

Reid called the president Saturday and apologized. In a statement issued after the call, Obama expressed support for Reid, saying, "As far as I am concerned, the book is closed."

Speaking to CNN contributor Roland Martin, Obama described Reid as "a friend of mine. He has been a stalwart champion of voting rights, civil rights."

"This is a good man who has always been on the right side of history. For him to have used some inartful language in trying to praise me and for people to try and make hay out of that makes absolutely no sense," he said in the interview, which will air this month.

"I guarantee you the average person, white or black, right now is less concerned about what Harry Reid said in a quote in a book a couple of years ago than they are about how we are going to move the country forward, and that's where we need to direct our attention."

A senior administration official said Monday that Obama will go to Nevada in February to campaign on behalf of Reid.

iReporter: "I don't think he should be kicked out of the Senate"

Republicans pounced on the controversy.

Sen. John Cornyn, R-Texas, head of the GOP's Senate campaign arm, called for Reid to give up his leadership posts after the "embarrassing and racially insensitive" remarks.

Steele also was on the defensive for a remark he made last week.

Speaking to Fox News, Steele said the GOP platform "is one of the best political documents that's been written in the last 25 years, honest Injun on that."

"Well, if it is, I apologize for it. It's not an intent to be a racial slur. I wasn't intending to say a racial slur at all," Steele said.

Numerous Democrats came to Reid's defense. The Congressional Black Caucus said Sunday that it had accepted his apology and dismissed calls for the Nevada Democrat to step down.

"Sen. Reid's record provides a stark contrast to actions of Republicans to block legislation that would benefit poor and minority communities," Lee, chairwoman of the caucus, said in a written statement.

While Sen. Reid has been producing for African-Americans, many of his critics were opposing him on these same issues.
--Rep. Eleanor Holmes Norton, D-District of Columbia
RELATED TOPICS

Rep. Eleanor Holmes Norton, D-District of Columbia, a former chairwoman of the Equal Employment Opportunity Commission, issued a statement saying, "Like President Barack Obama, African-Americans are likely to accept Majority Leader Reid's apology for an obvious reason. He has earned it."

She added, "Harry Reid's opponents will not find a welcome mat in the black community if they seek to capitalize on the Reid remark. While Sen. Reid has been producing for African-Americans, many of his critics were opposing him on these same issues."

Democrats rejected a parallel drawn by some Republicans between Reid's remark and one by former Sen. Trent Lott, R-Mississippi, in 2002. Lott lost his post as Senate majority leader after saying the nation would have been better off if Strom Thurmond had been elected president. Thurmond had run as a segregationist candidate in 1948.

"There is a big double standard here," Steele said on NBC. "When Democrats get caught saying racist things, you know, an apology is enough."

Gov. Tim Kaine of Virginia, chairman of the Democratic Party, shot back, telling NBC that "there is no comparison" between the two sets of remarks.

Reid is embroiled in a tough re-election campaign to stay in the Senate. Only one-third of Nevada voters have a favorable opinion of him, while 52 percent have an unfavorable opinion of the four-term senator, according to a survey by Mason-Dixon Polling and Research for the Las Vegas Review-Journal released over the weekend.

The poll was conducted Tuesday through Thursday, before news of Reid's comments broke.