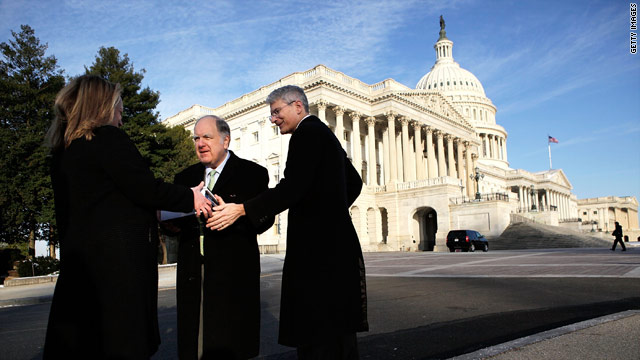 The budget process is difficult by nature since Republicans and Democrats have different spending policies. Democrats generally believe that government should help solve the nation's problems, while Republicans see more government involvement as a problem.

It's also difficult for Obama, who is trying to rein in the deficit and spur job growth at the same time.

Although there will be lots of back-and-forth about the big picture, there will also be intense arguments will on smaller items that affect specific states and districts.

"I'm willing to reduce waste in programs I care about, and I'm asking members of Congress to do the same. I'm asking Republicans and Democrats alike to take a fresh look at programs they've supported in the past to see what's working and what's not, and trim back accordingly," the president said Monday.

Obama's budget is just a suggestion, because Congress actually cuts the checks. The Office of Management and Budget will fill in the details on Obama's blueprint and present Congress with a fuller plan.

The House and Senate budget committees then take up the proposal and send it to the floor for a vote. Once a budget is passed, the appropriations subcommittees workout the details for the various government programs, sometimes slipping in earmarks for certain districts. If Obama doesn't approve of the final budget, he can veto it.

Some of the sticking points were already emerging as Obama's spending plan was being released.

"Just days ago, the President met with House Republicans and stressed the need to work together on fiscally responsible policy, and though we are ready to heed the President's call, the budget proposal his Administration offered today does not fit that criteria," House Republican whip Eric Cantor said in a statement.

"Economists, small business owners, and families across America understand that, at a minimum, we should not raise taxes while so many Americans are out of work," he said.

The budget extends the tax cuts for the middle class, but for the higher-income families, "we just can't afford it," Obama said. The budget proposal also eliminates tax cuts for oil companies to help rein in the deficit and promote clean energy.

But while some will feel the pain of the cuts, other measures will provide relief for those in need.

"I think it's very important to understand, we won't be able to bring down this deficit overnight given that the recovery is still taking hold and families across the country still need help. We will continue, for example, to do what it takes to create jobs. That's reflected in my budget. It's essential," the president said.

Obama's plan includes $53 billion in tax cuts and $50 billion in job-creating measures, including small-business tax cuts, as well as new investments in green technology and infrastructure programs for work on roads and bridges.

The president says his plan will reduce the nation's deficit by $1.2 trillion over the next 10 years.

Obama has also proposed a partial three-year freeze on non-discretionary spending. The cuts, which Obama says would save $250 billion, would not apply to the budgets of the departments of Defense, Homeland Security and Veterans Affairs, along with some international programs.

But he might face resistance from those in his own party with that approach.

House Speaker Nancy Pelosi praised Obama for approaching the budget with "equal commitment to economic growth and fiscal responsibility" but suggested that national security spending shouldn't be exempt from the freeze.

"I look forward to examining the President's proposal to freeze spending and believe waste can be found in all departments and agencies -- including the Defense Department -- so it too must come under scrutiny. We will continue to fully support our veterans and our men and women in uniform and their families, but curbing military contractors' wasteful practices must be part of our efforts to restore accountability, transparency, and fiscal discipline to the federal budget," she said in a statement.

The president said Monday that although the Defense Department is exempt from the budget freeze, "it's not exempt from budget common sense."

Obama called for eliminating what he considers an unnecessary defense program: production of the C-17 transport aircraft.

"Four years ago, the Defense Department decided to cease production because it had acquired the number requested, 180. Yet every year since, Congress has provided unrequested money for more C-17s that the Pentagon doesn't want or need. It's waste, pure and simple," the president said, noting that production of the aircraft costs $2.5 billion.

But halting production would pit the White House against congressional supporters of the C-17 who represent districts where jobs are tied to its production.

The president said his budget team went through every department's spending "line by line, item by item, looking for inefficiency, duplication and programs that have outlived their usefulness."

Some simple changes add up to big savings, like eliminating paper pay stubs at the Treasury Department and allowing veterans to keep their medication when they are discharged.

Obama said other cuts, however, are painful because "the goals of the underlying programs are worthy."

He cited plans to eliminate a program that provides grants for environmental cleanup of abandoned buildings. Although he supports it, "there are other sources of private and public funds to achieve it," he said.

Obama's budget would also cancel NASA's Constellation Program, which intended to send astronauts back to the moon by 2020. The budget changes will not prevent NASA from returning astronauts to the moon, but it would privatize such endeavors.

Peter Orszag, the director of the Office of Management and Budget, said the program is behind schedule and over budget. Funds would be better spent if redirected toward longer-range research and development to "allow us to go further in space and not just repeat what we've already done," he said.

Overall, Obama's proposed budget increases the National Aeronautics and Space Administration's budget by $6 billion over the next five years.

The president also proposed a bipartisan fiscal commission to come up with deficit-reduction proposals by certain deadlines. The Senate rejected a similar a deficit panel last week.

"The bottom line is this: We simply cannot continue to spend as if deficits don't have consequences, as if waste doesn't matter, as if the hard-earned tax dollars of the American people can be treated like Monopoly money, as if we can ignore this challenge for another generation. We can't," Obama said.