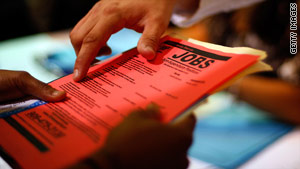 Extended unemployment benefits will expire for more than 200,000 people on Monday.
STORY HIGHLIGHTS

(CNN) -- Extended unemployment benefits will temporarily expire for thousands of Americans on Monday because the Senate went on its spring recess without approving a one-month deadline extension.

The extension, which had bipartisan support, would have cost about $10 billion, but a lone Republican, Sen. Tom Coburn, said no until the costs are offset.

The Oklahoma senator objected to a commonly used unanimous-consent agreement to pass the bill under emergency conditions, even if it increases the federal deficit. Coburn wants to eliminate additional government spending to pay for the bill.

"The legitimate debate is whether we borrow and steal from our kids or we get out of town and send the bill to our kids for something that we're going to consume today," Coburn said on the Senate floor.

It's the second time a Republican has blocked a so-called "emergency extension" of jobless benefits.

Kentucky Sen. Jim Bunning objected to adding to the deficit back in February.

"We can't do everything we'd like to do," Bunning said at the time. "We don't have the money."

Coburn on Monday refuted the notion he single-handedly blocked the extension, noting that he voted to stay in session to work out the issue.

Video: Have doctorate, will work for Census

"Congress had several opportunities to extend these benefits in a fiscally-responsible manner before our Easter break but rejected all of them. It's time for Congress to do what's right for both the unemployed and future generations and do the hard work of paying for important priorities," he said in a statement.

Bunning on Monday also pointed the finger at congressional Democrats for going on recess before agreeing to a solution that was fully paid for.

"I am disappointed that the Democrats continue to play political games to avoid paying for these benefits that are so important to the many struggling families across our nation who rely on them to make ends meet while they search for work. Clearly, the Democrats don't want to help the unemployed unless they can increase the deficit while they're doing it," he said in a statement.

"We believe that we need to approach these issues in their totality, with a fiscal framework that assures that we are getting to a much lower budget deficit," Lawrence, the head of the National Economic Council, said Sunday on CNN's "State of the Union."

The unemployment benefits provision was a part of the Continuing Extension Act of 2010, which affects other programs, too. The Senate's inaction means lapses in funding for COBRA, Medicare payments to doctors and the National Flood Insurance Program, among other things.

The Senate is expected to take up the measure after lawmakers return from recess the week of April 12. Key Democrats said they hope to pass a retroactive extension, compensating the unemployed for a gap in funding. If approved, it would be the seventh time the deadline has been extended since June 2008.

Which programs did Congress leave unfunded?

For the meantime, Democrats are furious.

Sen. Byron Dorgan represents North Dakota. At 4.1 percent, the state has the lowest unemployment rate in the country.

At least 212,000 Americans will be affected Monday.

Alexander Mitiuriev, an unemployed aerospace engineer, said Coburn's argument that the nation's children will carry the burden doesn't resonate with him because his kids are being affected right now.

"This is my children. For right now, they are affected," he said. "It makes no sense," he said, adding that his children need the money now.

Clovia Cox, a personal trainer who is out of work, agreed with Mitiuriev, saying that the future is on the line today.

"Having people give up their future dreams and trying to save money for a better working car or better career or a better education -- that is the future. The future starts now. It's desperate now," she said.

About 11.5 million people currently depend on jobless benefits. The average unemployment period lasts 32.1 weeks. Of those unemployed, a record 44.1 percent of have been jobless for 27 weeks or more.