Analysis: After new START, what's next? 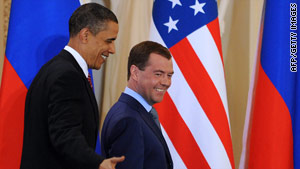 Washington (CNN) -- Whittling down the massive American and Russian nuclear arsenals has been an arduous task. Under the terms of the new START treaty, each side can still possess 1,550 nuclear warheads. By anyone's measure, that is a lot of nukes. There is little doubt those numbers enable both countries to respond to any dire threat.

But as President Obama pursues his dream of zero nuclear weapons worldwide, is there a point where further reductions create serious problems for the nuclear powers?

For the Russians, the warheads have a powerful symbolic value. For the United States, more cuts could have a direct effect on current levels of global protection.

At 1,000 or fewer nuclear warheads, the decisions get really tough for the United States, according to Sharon Squassoni, a nuclear weapons expert at the Center for Strategic and International Studies.

In the Obama administration's newly released nuclear posture review, each leg of that triad will be maintained for the next 10 years to hedge against any unexpected technological problems or operational vulnerabilities in one of the platforms.

Each leg is also considered to have its own distinct advantage. Submarines have greater survivability, ICBMs contribute to stability, and bombers are more of a deterrent because of their visibility.

Once the number of warheads falls below 1,000, the United States could run into operational problems as well as potential political ones in maintaining the strategic triad, some warn.

The submarine leg is the most difficult to cut. There are currently 14 submarines split between the Atlantic and Pacific oceans. At any given time, only two submarines in each ocean are in a position to fire nuclear weapons. The others are either in port, under maintenance or traveling to or from deployment. Many observers think at least 10 submarines are necessary to retain the nuclear capability at a viable, practical level.

There are currently 450 ICBM missiles located on three bases. If the number of missiles drops too low, it may no longer be cost effective to maintain all three locations. But closing them means a political fight. Congressional members representing areas around the bases would do everything in their power to prevent closure.

Bombers would be the easiest to adjust and possibly even eliminate from the triad. The bombers' nuclear payload could be replaced with conventional weapons. However, while they are tempting to cut, the bombers are the one leg of the triad that is predictable. They are visible and, unlike missiles launched from a silo or submarine, a bomber can be turned around.

Frank Gaffney, the president of the Center for Security Policy, believes further cuts will bring an end to the triad and be detrimental to the United States.

"You will be exposing your forces and your country to the sorts of risks that we decided we didn't want to entertain ... enhancing the prospects for war," he warned.

Other experts don't buy the arguments about the necessity to even keep the triad. Stanford University's Pavel Podvig labeled the triad a product of the Cold War.

"Triad was based on first-strike survivability, a concept born in the 1950s which has nothing to do with today," said Pavel. He believes any single leg of the triad is enough to meet any potential crisis.

Daryl Kimball, executive director of the Arms Control Association, says one of the ICBM bases could be eliminated, the number of submarines cut to six and the nuclear-armed bombers eliminated without impairing nuclear capability.

"If the purpose of the [U.S.] nuclear force is to deter nuclear attacks by others, then the target list put together to support that reason could be much smaller," Kimball said.

But others warn the nation needs to have more weapons than targets. With China and India developing long-range ballistic missiles, the target list could be growing, not shrinking.

Retired Adm. James "Ace" Lyons said he is most concerned about what he called the lack of consideration of China's rapid modernization of its nuclear force structure. "With their double-digit increase for the last several years to their military budget, every weapons system China has developed is targeted against U.S. forces," he said.

Russia has its own concerns. Alexei Arbatov of the Carnegie Endowment said Russia will find it increasingly difficult to cut its nuclear arsenal any further than the 1,550 stipulated in the new START treaty.

"Nuclear weapons are seen as the only remaining pillar of Russia's special status in the world," said the weapons expert. Nuclear weapons are considered by Russia to be "the great equalizer" to help make up for "Russian inferiority" in conventional weapons and technology, he said.

Russia is concerned that technologically superior U.S. conventional arms could take out one of its ICBMs, something the Russians would consider a first strike and a justification for retaining higher levels of nuclear warheads.

And Squassoni of the Center for Strategic and International Studies said a reduction to 1,000 or fewer warheads would raise the question about whether the other nuclear nations should participate in the arms control talks.

The United States and Russia currently possess the lion's share of warheads, thousands more than any other country.

France, China, Britain, Israel, India and Pakistan are known to have nuclear weapons. North Korea is believed to have upwards of a dozen and many nations maintain Iran's uranium enrichment program is intended to make the fissile material needed for nuclear weapons.

As the disparity in numbers lessens, the time could be ripe to include the others. One of the Obama administration's goal is to pursue multilateral arms control negotiations.