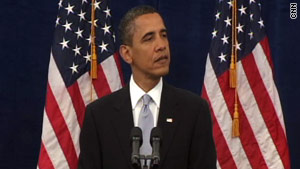 "The time has come ... for this nation to fully embrace a clean energy future," President Obama says in prepared remarks.
STORY HIGHLIGHTS

(CNN) -- President Obama used the oil spill crisis in the Gulf of Mexico to advance his alternative energy agenda Wednesday, calling it a warning that America needs to transition away from dependence on fossil fuels.

"The catastrophe unfolding in the Gulf right now may prove to be a result of human error -- or corporations taking dangerous shortcuts that compromised safety," Obama said in remarks at Carnegie Mellon University in Pittsburgh, Pennsylvania.

Obama's emphasis on energy issues was part of a broader focus in the president's speech on the state of the economy. Administration officials pledged to focus strongly on job creation earlier in the year but have since been forced to grapple with a host of unexpected challenges, including the oil spill.

"The time has come, once and for all, for this nation to fully embrace a clean energy future," Obama said. "That means [making] everything from our homes and businesses to our cars and trucks more energy efficient. It means tapping into our natural gas reserves, and moving ahead with our plan to expand our nation's fleet of nuclear power plants. And it means rolling back billions of dollars in tax breaks to oil companies so we can prioritize investments in clean energy research and development."

The president also renewed his call for what critics characterize as a carbon tax.

"The only way the transition to clean energy will succeed is if the private sector is fully invested in this future," he said. "And the only way to do that is by finally putting a price on carbon pollution."