Obama, Clinton vow to defend gay rights, adding 'it's not who we are as Americans' 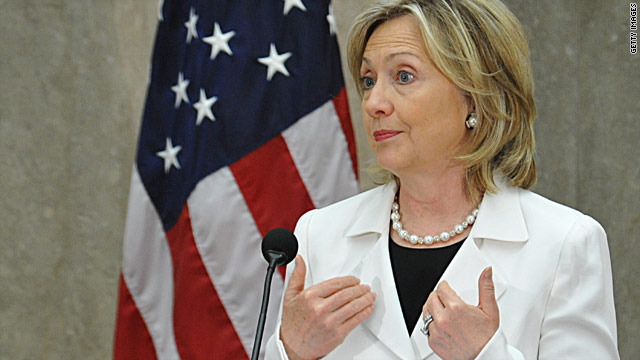 Washington (CNN) -- President Obama and Secretary of State Hillary Clinton pledged to end violence and discrimination against gays and lesbians at home and abroad Tuesday, as the Obama administration moves to extend further benefits to gays working in the federal government.

"It's not right, it's not who we are as Americans, and we're going to put a stop to it," Obama told a raucous White House reception honoring Gay and Lesbian Pride Month.

Earlier, Clinton received several standing ovations from a standing-room only crowd of several hundred during her address at an event co-hosted by the State Department's Office of Civil Rights and GLIFAA, the organization for Gays and Lesbians in Foreign Affairs Agencies.

"We are moving together in the right direction," said Clinton. "We reaffirm our commitment to protect the rights of all human beings."

The White House event invited politicians and government officials as well as lesbian, gay, bisexual and transgender American from across the country, including young people "who have stood up for equality," said White House spokesman Shin Inouye.

At a similar event last year, six months after Obama took office, participants expressed frustration over what they called a lack of progress in confronting discrimination issues that the president had promised to resolve.

This time, Obama received loud applause, cheers and whistles as he cited steps his administration has taken, including a new hate crimes law, extending federal benefits to gay employees and a push for an employee discrimination bill.

The Obama administration is expected to announce Wednesday that gay workers will be able to take medical leave to care for the sick or newborn children of their same-sex partners as part of the Family and Medical Leave Act, which generally allows those working for companies with 50 or more employees to take 12 unpaid weeks off to care for newborns or children with serious health issues.

A bill that would repeal the policy after a Pentagon review is completed in December is before Congress, the president noted.

"We have never been closer to ending this discriminatory policy, and I'm going to keep on fighting until that bill is on my desk," he said to cheers.

Attending the event was Janice Langbehn of Lacey, Washington, who was denied hospital visitation rights when her partner of 18 years, Lisa Pond, was stricken with a fatal brain aneurysm while on vacation in Florida. Obama mentioned her story on Tuesday, calling the way she was treated "wrong" and "cruel."

Earlier, Clinton said she is asking embassies in Africa and elsewhere to report on rights of the local lesbian, gay, bisexual and transgender communities. The State Department also is placing more attention on ensuring gays around the world have access to HIV/AIDS prevention and treatment, and providing grants to human rights activists who are persecuted either because they are gay or defend gay rights, she said.

Clinton said she is equally concerned about creating an environment at the State Department in which gay employees feel valued and "can give 100 percent." That is why, she said, she supported offering equal benefits to same-sex partners of State Department employees, a move that encouraged Obama to authorize such benefits for gays throughout the federal government.

She noted the State Department also has made it easier for transgender people to change their passports and, for the first time, the agency's "equal opportunity statement" will include gender identity. It already includes sexual orientation.