Obama, Cameron say it again -- US, UK have 'special relationship' 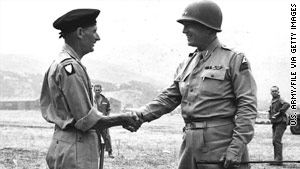 Washington (CNN) -- Like a couple renewing their vows, U.S. President Barack Obama and British Prime Minister David Cameron once again reaffirmed the "special relationship" between the United States and the United Kingdom during a joint press conference at the White House on Tuesday.

Calling it an "opportunity to renew the relationship with my partner, Prime Minister Cameron," Obama also claimed the U.S. has "no closer ally, no stronger partner."

"We can never say it enough, the United States and the United Kingdom enjoy a truly special relationship," Obama said at that the start of the press conference calling the meeting a "brilliant start as partners who see eye-to-eye on virtually every challenge before us."

Cameron, on his first visit to the White House, had similar sentiments, saying the relationship between the United States and the United Kingdom is not just "an extraordinary special relationship.

"To me, it is also an absolutely essential relationship if we are going to deliver the security and the prosperity that our people need."

The two men appear serious about this commitment. In fact, Obama has used the term "special relationship" with only one other country, Israel.

In addition to the formalities of the day, the president and first lady presented gifts to the prime minister and wife, Samantha, and their children.

According to the White House, "President and Mrs. Obama gave the Prime Minister and Mrs. Cameron a framed and signed color lithograph by Edward Ruscha titled 'Column with Speed Lines.' The First Lady gave Mrs. Cameron a gift basket including a baby blanket. Gifts for the children are a silver charm necklace featuring 8 White House charms for [Cameron's daughter] Nancy and a custom D.C. United Soccer jersey for [Cameron's son] Elwen."