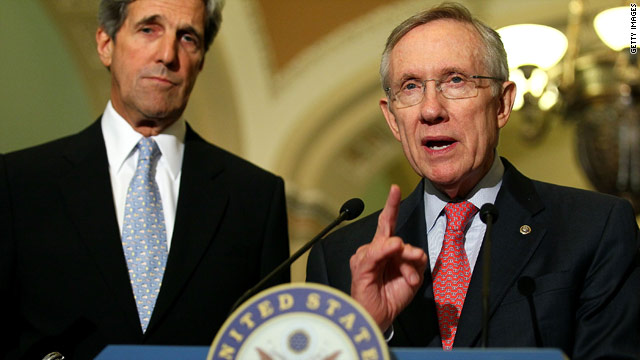 Washington (CNN) -- Democrats admit that when it comes to passing comprehensive energy and climate change legislation, they simply do not have the votes.

So in an effort to get something through, the Senate's top Democrat announced that he will introduce a smaller bill in the coming days focusing on specific energy needs.

"Many of us want to do a thorough, comprehensive bill that creates jobs, breaks our addiction to foreign oil and curbs pollution," Senate Majority Leader Harry Reid told reporters Thursday. "Unfortunately, this time we don't have a single Republican to work with in achieving this goal."

Reid had promised to bring a bill to the Senate floor by the August recess.

The Nevada Democrat said he will put four requirements in the new bill:

• Holding BP accountable to "ensure that they clean up their mess" in the Gulf of Mexico and to deal with "things like this that happen in the future."

• Lessening the country's dependence on foreign oil by investing in the manufacturing of natural gas vehicles -- mainly big trucks.

• Putting money back into the land and water conservation fund.

Reid said all four of the requirements have bipartisan support.

But most notably absent from Reid's scaled-down bill? The so-called cap-and-trade provision.

Climate change legislation stalled in the Senate after the House of Representatives passed its own energy bill last year. The House plan included a cap-and-trade system in which a price is set for greenhouse gas emissions, such as carbon dioxide, and polluters can obtain and trade credits for emissions over a set threshold.

Republicans are against such a plan. Oil and coal producers also oppose a cap-and-trade system, but supporters say it is the best way to start to reduce the nation's dependence on fossil fuels.

Following Reid's announcement, Audrey Jones, of the conservative Heritage Foundation, said that Republicans and others opposed to the Democrats' plans shouldn't be cheering just yet.

"In a year when seemingly dead legislation has suddenly come back to life, it is premature for Americans to dance a victory dance that their economy has been spared, " Jones wrote in a blog post. "Even small victories in Washington are followed closely by new battles."

She added that Americans must remain watchful for cap-and-trade to return later in the year and should "stay focused in the near term on the possible danger of new legislation that could drive America's offshore oil and gas industry out of business, and hold out for a more prudent plan."

Meanwhile, Sen. John Kerry, D-Massachusetts, said that while Reid's new bill is "narrow" and "limited," it is just the beginning of the fight to get a comprehensive bill passed. Kerry, along with Sens. Joe Lieberman, I-Connecticut, and Lindsey Graham, R-South Carolina, worked to craft a Senate bill.

"Now let me be crystal clear," Kerry said as he stood alongside Reid and Carol Browner, the director of the White House Office of Energy and Climate Change Policy. "As Sen. Reid said, this legislation that he has proposed does not replace climate legislation."

Kerry said that President Obama called him before Thursday's meeting and said he is committed to working at a "more intensive pace together" with Browner and other members of the administration to "help bring together the ability to find 60 votes for that comprehensive legislation."

Obama has been a key figure in the energy talks. In late June, he met with a bipartisan group of senators at the White House to discuss passing an energy and climate change bill this year. The president was hopeful that something could be done.

"There was agreement on the sense of urgency required to move forward with legislation, and the president is confident that we will be able to get something done this year," according to a White House statement.

Obama told senators that he believed the best way to make a transition to a clean-energy economy is with a bill that "makes clean energy the profitable kind of energy for America's businesses by putting a price on pollution," the release said.