CNN poll: Most back Arizona law but cite concerns about effects 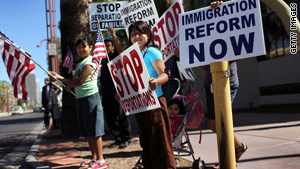 Washington (CNN) -- Most Americans support Arizona's new law on illegal immigration, but according to a national poll, a majority think the controversial measure will increase discrimination against Hispanics while not necessarily making a dent in the problem.

A new CNN/Opinion Research Corp. survey also indicates that Hispanic and whites don't see eye to eye over the law.

Fifty-five percent of people questioned in the poll say they favor the measure, with four in 10 saying they oppose the law. Thirty-four percent of white respondents oppose the measure, but among Hispanics, that number jumps to 71 percent.

"Support for the Arizona law also varies by gender and age," said Keating Holland, CNN's polling director. "Nearly six in 10 older Americans and six in 10 men favor the measure. But only a bare majority of women and Americans under 50 years old think the law is a good idea."

The survey's Tuesday release comes two days before the scheduled implementation of a tough and controversial immigration law in Arizona. The measure, which Arizona Gov. Jan Brewer signed into law in April, requires police to question people about their status if they have been detained for another reason and if there is reason to suspect they're in the United States illegally. It also targets those who hire illegal immigrant laborers or knowingly transport them.

Critics have said the law will promote racial profiling. Supporters of the bill say its aim is to enforce federal law.

The survey indicates a majority of Democrats oppose the new law, while most Republicans and independents support the measure.

Will the measure reduce the flow of illegal immigration?

According to the poll, the public is divided, with 48 percent saying the law will help reduce illegal immigration and 50 percent saying no. Thirty-five percent of Hispanics say the law will be effective, 15 percentage points lower than how whites responded.

According to the poll, whites and Hispanics disagree on other immigration measures as well, particularly a fence along the Mexican border and sanctions against businesses that employ illegal immigrants.

"There is widespread support among all races for a program that would allow illegal immigrants to stay in the U.S. legally if they had a job and paid back taxes. But keep in mind CNN poll results released on Monday, which show that most Americans want to see the government concentrate on halting the flow of illegal immigrants and deporting those already here before taking any steps toward permanent residency," Holland says.

So how does this play into the midterm elections, where Hispanic voters could play a crucial role in determining which political party controls the next Congress?

The survey indicates Hispanics remain in the Democratic camp, but there are some indications that the GOP may make headway among them.

Hispanics favor the Democratic candidate for Congress in their district over the GOP candidate by a margin of 54 percent to 39 percent.

"That's an indication that Democrats will again capture the Hispanic vote in November. But they probably won't win this key demographic group with the kind of margin they got in 2006, when the Democrats racked up a 69 to 30 percent advantage that helped the party regain control of Congress," Holland adds.

According to the survey, 57 percent of Hispanics approve of how President Obama is handling his job overall. Obama gets low marks from Hispanics on the economy and illegal immigration, but they heartily approve of his track record on health care.

The CNN/Opinion Research poll was conducted July 16-21, with 1,018 adult Americans questioned by telephone, including a special sample of 308 black and 303 Hispanic respondents. The survey's overall sampling error is plus or minus 3 percentage points.