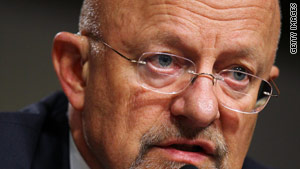 James Clapper will be the fourth Director of National Intelligence in five years.
STORY HIGHLIGHTS

Washington (CNN) -- James Clapper was confirmed unanimously by the Senate Thursday night to be the nation's next intelligence chief.

Clapper, tapped by President Obama for the Director of National Intelligence job, will oversee the nation's 16 spy agencies.

He will be the fourth person in the position since it was created five years ago. He succeeds Dennis Blair, who was pressured to resign because of differences with the White House over the scope of his role and turf battles with the CIA director.

The Senate vote came before the Senate's August recess and several days after Sen. John McCain, R-Arizona, said he would hold up the confirmation process until he received a report he had requested.

"This is good news because to have left this key position vacant could well have damaged our national security," said Sen. Dianne Feinstein, chairwoman of the Senate Intelligence Committee.

"General Clapper has excellent credentials, and the support of the White House and key intelligence leaders," Feinstein, D-California, said in a statement released after the vote. "He is mindful of the importance of independence from the Pentagon, he understands the DNI's responsibility to provide strategic intelligence to policymakers, and he knows that the job entails more than simple coordination."

Acting Director of National Intelligence David Gompert said in a statement after the vote that Clapper was the right person for the job.

"As we face evolving security threats and continue to build an integrated intelligence enterprise, the intelligence community and the nation are extremely fortunate to have such a distinguished leader at the helm," he said.

During his recent confirmation hearing, Clapper said he wouldn't agree to take the job if he thought he "was going to be a titular figurehead or hood ornament."

A number of senators had questioned whether the DNI had enough authority to get the job done. Clapper said he did not need any new authority to oversee the 16 intelligence agencies and offices.

"With all of the discussion about the lack of authority, of the perceived weakness of the office of director of national intelligence, I believe it already does have considerable authority, either explicit in the law... or implicit that can be exerted," Clapper said. He vowed to "push the envelope" to be successful in the job.

The office of DNI was established by Congress in the aftermath of the September 11, 2001, terrorist attacks to help improve the coordination of the intelligence community and to correct deficiencies in information-sharing among its members.

CNN's Ted Barrett and Pam Benson contributed to this report.