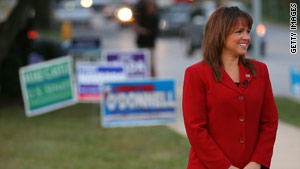 Now the question is whether the right-wing candidates can also defeat Democratic rivals in November's congressional elections, when the stakes are higher and the full electorate is deciding.

The results in Delaware and New York highlighted the last major day of primary voting before the upcoming election in just under seven weeks.

In addition, former Gov. Robert Ehrlich won the Republican gubernatorial primary in Maryland to set up a rematch against Martin O'Malley, the Democrat who ousted him in 2006.

"We the people will have our voice heard in Washington, D.C., once again," a beaming O'Donnell told exuberant supporters at her victory party in Dover.

Video: What is the Tea Party?

O'Donnell won more than 53 percent of the vote in the bitter campaign that displayed internal Republican warfare between conservative Tea Party supporters and the more moderate party structures.

Castle was backed by the national Republican Party, while O'Donnell received the endorsement of former Alaska Gov. Sarah Palin as well as $150,000 in late funding from the Tea Party Express.

O'Donnell, running as a Washington outsider, insisted the Republican establishment was trying to drive her out of the race and hand victory to Castle, whom she refers to as "the anointed one."

In her victory speech, O'Donnell made a plea unity, saying: "If those same people who fought against me work just as hard for me, we will win."

Later, she told CNN that she can win without the support of the national Republican Party.

"They don't have a winning track record," O'Donnell said of the national party. "If they're too lazy to put in the effort that we need to win, then, so be it."

The National Republican Senatorial Committee offered its congratulations to O'Donnell immediately after the result was determined.

"We congratulate Christine O'Donnell for her nomination this evening after a hard-fought primary campaign in Delaware," said a statement by Rob Jesmer, the NRSC executive director.

However, a top Republican official told CNN on Tuesday night that O'Donnell will have to show she can generate viable support before the national party will give her money.

"It is now incumbent on Sarah Palin, (U.S. Sen.) Jim DeMint and the Tea Party Express to help support her," the official said on condition of not being identified by name. "They got her here. Now make it happen."

The New York governor's post has proven hazardous in recent years. Gov. Eliot Spitzer resigned amid a prostitution scandal, and his successor, David Paterson, decided against running for another term due to allegations of wrongdoing involving World Series tickets and a domestic abuse case involving an aide.

Ayotte gave up her state post to run for the Senate nomination with encouragement from national Republicans. Considered the favorite in the seven-candidate contest for months, Ayotte instead found herself with a razor-thin lead with Lamontagne, a Manchester attorney and the 1996 Republican nominee for governor, with 52 percent of the returns accounted, according to AP figures.

Unlike O'Donnell in Delaware, though, Lamontagne didn't get Palin's endorsement. Instead, Palin backed Ayotte, calling her a "Granite Grizzly" and "the true conservative running for the U.S. Senate in New Hampshire."

However, Palin's endorsement and Ayotte's support from many national Republicans may have backfired in fiercely independent New Hampshire.

Victories by O'Donnell and Paladino, and the possibility of a triumph by Lamontagne in New Hampshire, showed the strength of the Tea Party within the political right, after similar results ousted GOP incumbents or insiders in Idaho and Alaska.

However, the Republican infighting also raised questions about GOP unity heading into November.

Rangel, meanwhile, received help from former President Bill Clinton in defeating five challengers in the Democratic primary for the House seat he has held for 40 years.

Despite allegations by the House ethics committee that Rangel committed financial wrongdoing and harmed the credibility of Congress, he raised more money than his opponents and easily won the vote in his Harlem district.

The situation was reversed in Washington, where Fenty swept into office in 2006 promising to fix the District of Columbia's struggling schools. However, the AP figures showed he trailed City Council Chairman Vincent Gray with 28 percent of the votes counted, in part because of union opposition to his education reform efforts.

"We've got an uphill battle because we made tough decisions," Fenty said before the vote. "We'll continue to make those tough decisions because they're right for the people. But we're not naive. We know this has cost us a little political popularity that we came into the polls with."

The race is being closely watched far beyond the District of Columbia because the outcome could carry significant implications for the national debate over education reform.

Fenty brought in Michelle Rhee as chancellor of D.C. Public Schools, and she has since become famous for changes that that have become a model of education reform advocated by the Obama administration.

Rhee shut down two dozen schools, fired hundred of educators -- including more than 100 teachers this summer -- for poor performance, and overhauled the teacher evaluation system to include, for the first time, student performance as a measure of success. Local and national teachers unions have fought her efforts.