Obama, Biden head back to school to reach young voters 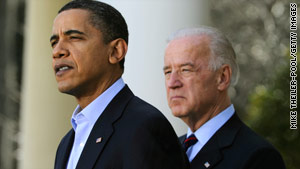 (CNN) -- President Obama, Vice President Joe Biden and other top Democrats are heading back to school Tuesday, in hopes of convincing first-time voters from the 2008 election to vote again in 2010.

The idea is to fire up "surge" voters and motivate them to go to the polls again in this November's midterm elections. According to national exit polls from 2008, 11 percent of people who cast ballots in the presidential contest said they were first time voters, and seven out of 10 of those new voters said they backed Obama in the election. Many of those people were young voters, and exit polls indicated that two-thirds of people age 18-29 voted for Obama.

In advance to Tuesday's rallies, the president held a conference call with college and university journalists.

"You can't sit it out. You can't suddenly just check in once every 10 years or so, on an exciting presidential election, and then not pay attention during big mid-term elections where we've got a real big choice between Democrats and Republicans," Obama said.

There's no mistake in the locations for the Obama and Biden rallies. In Wisconsin and Pennsylvania, the Democrats face tough odds in holding onto open Senate seats and governorships. Polls also indicate that Republicans have a good chance of grabbing back a bunch of House seats.

Obama's speech at the University of Wisconsin is the first in what Democratic Party officials say will be a series of "Moving America Forward" events by the president over the next couple of weeks.