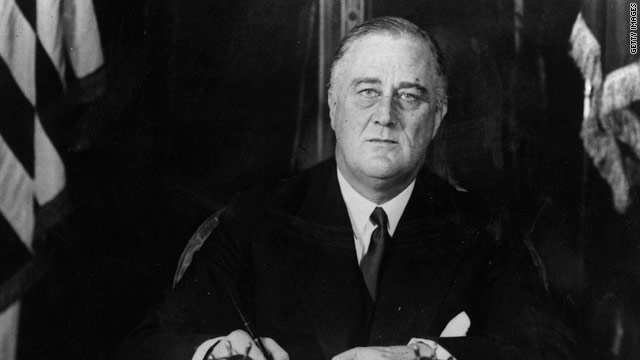 (CNN) -- One Supreme Court justice threatened to punch out another during a legal debate. Another called a colleague "Der Fuehrer." And a third had joined a terrorist group.

They were petty, manipulative and vindictive. They were also among four of the greatest men to sit on the U.S. Supreme Court, according to Noah Feldman, author of "Scorpions: The Battles and Triumphs of FDR's Great Supreme Court Justices."

President Franklin Roosevelt's campaign to reshape the Supreme Court may seem distant today. Yet the mammoth legal question the Roosevelt-era court seemed to settle -- the federal government's right to regulate interstate commerce -- is being debated again as challenges to the new health care law make their way to the current Supreme Court.

Feldman's book shows how four of Roosevelt's Supreme Court appointees -- Felix Frankfurter, Robert Jackson, Hugo Black and William O. Douglas -- handled that legal challenge as well as others during one of the most tumultuous periods in U.S. history.

All four helped reinvent the Constitution after Roosevelt picked them to transform a conservative Supreme Court that had struck down many of his New Deal programs, says Feldman, a law professor at Harvard University in Massachusetts.

Feldman's book reveals how the judges' upbringings -- and personal failures -- shaped their judicial decisions. Associate Justice Douglas, for example, was born poor and raised by a single mother. He once worked as a janitor and fed sheep.

A person who has a big personality and who is capable of ruffling feathers can turn to be a great justice.
--Noah Feldman, author "Scorpions," a look at FDR's quest to transform the Supreme Court

"There's a very famous Supreme Court case where a man was arrested as a vagrant because he didn't have enough money in his pocket, "Feldman says. "That was his crime. Douglas sat in on that case. That case looks different if you've been poor."

CNN talked with Feldman about these four judicial "scorpions," a term used to describe the bitter jousting that often occurs among Supreme Court justices.

Feldman's answers were edited for brevity.

CNN: Why should people care today about the battles FDR fought with the Supreme Court in the last century?

Second, there are real parallels between their world and our world. As in their period, the greatest challenges were economic. The same is true now.

The big constitutional question today is what rights corporations will have against government efforts to regulate them. For example, in "Citizens United," the Supreme Court gave corporations the same free speech rights as citizens in the election contest.

CNN: You say their personal lives shape their judicial decisions? Can you give me an example?

Feldman: Hugo Black had been a KKK member. That fact wasn't revealed until after he was confirmed to the court. He was ashamed of that fact. He became the strongest voice among the justices for striking down segregation [in Brown vs. Board of Education]. I think he voted that way because he was trying to live down the shame of belonging in the Klan.

CNN: What can President Obama learn from FDR's experience shaping the court?

Feldman: When you have a chance to nominate someone, your first thought shouldn't be, "Who is confirmable?" It should be, "Who is going to be remembered 50 years later?" Judicial temperament is not the be-all-and-end-all.

CNN: Is the looming health care bill challenge at the Supreme Court a replay of certain issues decided by the Roosevelt-era court?

Feldman: Just like in the New Deal, there were huge new programs. The programs were different from what had come before. They involved great government involvement in business and people's lives. A conservative Supreme Court blocked some of those programs. They did it on the grounds that individual rights were being violated.

Both those arguments were made in the Roosevelt era. It is a test of this Supreme Court to see if they'll accept those kinds of arguments

CNN: Did the Roosevelt-era court settle those legal arguments?

Feldman: Legally, yes. Legally, there's little doubt in my mind that the correct holding is the health care plan is perfectly constitutional.

I don't think any of these [Roosevelt-era] justices would be confirmed today.
--Noah Feldman, author of "Scorpions"
RELATED TOPICS

But in our Supreme Court, nothing is ever permanently decided. It could happen [the Supreme Court declaring the new health care law unconstitutional], but I don't think it's likely. There is the principle of precedent.

CNN: Could the four Roosevelt judges make it on the court today?

Feldman: We need people who are not perfect. Flawed people often have the capacity to do great things, and they're willing to swing for the fences.

We have a confirmation process that, if you've ever made mistakes, it's hard to confirm. We're losing some of our best and most interesting people because this process requires you to be perfect.

I don't think any of these [Roosevelt-era] justices would be confirmed today. Frankfurter defended Sacco and Vanzetti , two terrorists. Douglas threatened to take on the New York Stock Exchange. ... Can you just imagine today what they would say about a nominee who defended terrorists?

We're losing something. If you look at the last four justices, they all had similar profiles: fancy colleges, fancy government jobs, executive branch service.

You have four people who have careers that are essentially identical. They all have similar life experiences and hung out with the same crowd.

You do have great diversity on the court today. But you don't have the diversity of actual life experiences. They're all super cautious. They knew early on that they wanted to get on the [Supreme] Court, and they weren't going to mess it up.