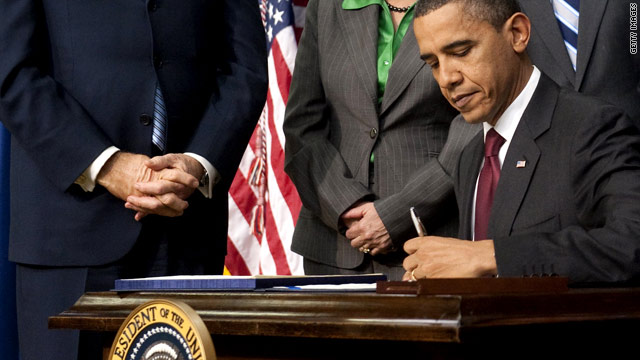 Washington (CNN) -- President Barack Obama signed an $858 billion tax bill into law Friday, saying, "this is progress, and that's what (the American people) sent us here to achieve."

Obama was flanked on stage by both Democrats and Republicans, including Senate Minority Leader Mitch McConnell, who was instrumental in getting the bipartisan legislation passed. Incoming House Speaker John Boehner, however, did not attend the signing.

With Obama's signature, states can begin to reinstate unemployment benefits, so that people "will get them in time for Christmas," he said.

"Not only will middle class Americans avoid a tax increase, but tens of millions of Americans will start the New Year off right by opening their first paycheck to see that it's actually larger than the one they get right now.

Tax cuts and your paycheck

The cost of extending unemployment

"This is real money that's going to make a real difference in peoples' lives. I would not have signed this bill if it didn't include other extensions of relief that were set to expire."

The House of Representatives gave final approval late Thursday night to the deal, negotiated by the White House and top Senate Republicans. The final vote of 277-148 had almost equal numbers of Democrats and Republicans in support.

The package includes a two-year extension of the Bush-era tax cuts, which are set to expire December 31. It also would extend unemployment benefits for 13 months, cut the payroll tax by 2 percentage points for a year, restore the estate tax at a lower level and continue a series of other tax breaks.

The bill, which cleared the Senate 81-19 on Wednesday, passed despite objections from both the left and the right. However, the pending expiration of the lower tax rates dating to 2001 created a deadline that forced both sides to accept provisions they had long opposed.

Obama and congressional Democrats yielded in their opposition to extending the lower tax rates to wealthy Americans and also agreed to a lower estate tax than had been scheduled to take effect. In return, Republicans led by McConnell agreed to extending unemployment benefits along with the payroll tax cut and other tax breaks that conservatives generally oppose as government stimulus measures.

Obama complained that the Republicans were holding the extended tax cuts for the rest of the country "hostage" by insisting that the wealthiest 2 percent of taxpayers be included rather than approving an extension of the tax cuts for low and middle-income Americans.

"This is very difficult," said House Speaker Nancy Pelosi, D-California. "Nobody wants taxes to go up for the middle class. We just don't see why we have to give an extra tax cut to the wealthiest."

Rep. Lloyd Doggett, D-Texas, voted against the bill. He said he had a good reason: concern about the federal debt.

"We all like less taxes, but this came at an immense cost," he said on CNN's "American Morning" on Friday. "We say it's our money. It certainly is. But it's also our debt. And now we have much more of it."

"I think it is important we realize this is the American taxpayers' money," she said Friday morning. "Yesterday, what we did was to extend the Bush-era tax cuts. ... This is letting taxpayers keep their money. This is the money they are not going to send to Washington."

Republican Rep. Dave Camp of Michigan, meanwhile, had argued that letting anyone's taxes go up would hinder economic recovery, while a return to higher tax rates for those making more than $250,000 a year would hit small-business owners who are important job creators.

A procedural snag earlier Thursday forced House Democratic leaders to pull the bill from consideration over concerns that they lacked support on how the debate would proceed under rules they had set. The House then went into indefinite recess as liberal Democrats seeking changes to the bill huddled with party leaders to work out a solution.

Eventually, debate resumed on a new set of rules that would allow the House to vote on a proposed change to the controversial estate tax provision and then on the full bill itself. The House rejected the amendment changing the estate tax rate and then easily passed the unchanged bill.

Earlier, Obama strongly praised the Senate vote and urged the House of Representatives to quickly approve the bill.

House Democrats, however, repeatedly warned that they would try to change the measure, particularly the estate tax provision. The estate tax was scheduled to return with an exemption on inheritances up to $1 million and tax amounts above that at a rate of 55 percent. Under the tax package, the tax rate was reduced to 35 percent on amounts above a $5 million individual exemption.

Conservatives argued that an estate tax more stringent than the level set by the package would, among other things, make it nearly impossible for many family-owned small businesses to be passed down from one generation to the next. Liberals contended that a lower or nonexistent estate tax would merely benefit the wealthy while doing little to aid the economy.

A number of House Democrats wanted to change the estate tax to levels previously approved in a separate House bill that would exempt inheritances up to $3.5 million and tax amounts above that at a 45 percent rate. Pelosi said the change would bring in an additional $23 billion and would affect only 6,600 more families than the lower rate and higher exemption in the negotiated tax deal.

However, more than two dozen moderate House Democrats submitted a letter to their House leadership calling for the tax package to be passed unchanged so it could go directly to Obama to be signed into law.

Republicans involved in the negotiations with the White House on the package warned that any changes by the House could derail the entire proposal, causing tax rates to increase in 2011.

With the Bush-era tax cuts set to expire at the end of the year, Obama and congressional Democrats faced a fast-approaching deadline to reach a deal. Republicans won control of the House and reduced the Democratic majority in the Senate in the new Congress convening in January, which would give Democrats less leverage to negotiate after the current lame-duck session.

House liberals weren't the only ones objecting to the agreement. A number of conservatives, including likely 2012 GOP presidential candidate Mitt Romney, were challenging the deal because it doesn't permanently extend the Bush-era tax cuts and would add to the deficit.