What Republicans have done -- and what they need to do 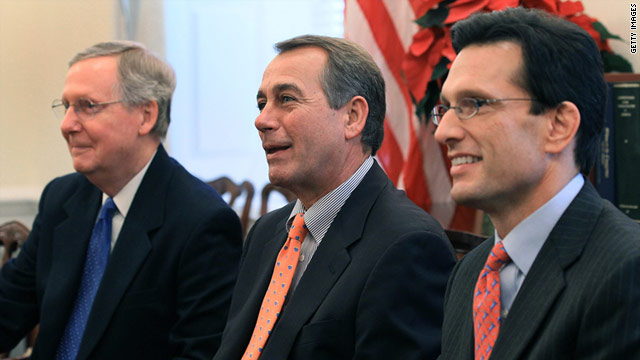 Washington (CNN) -- After being left for dead in the wake of the 2008 election, Republicans staged a stunning comeback over the past year.

Winning back the House and gaining a significant number of seats in the Senate in November gives them another stab at governing. The energized GOP, added to Americans' discontent with the way the country is headed, played a large factor in the midterm election wins.

In January, Republicans will control the agenda in the House and the future of bills in the Senate.

It didn't hurt that they were able to win over an influential voting bloc -- the independents who make or break elections -- in rolling up impressive wins in November.

Any analyst will tell you that offense is key to winning a game, and that's what Republicans went for. They shined a spotlight on Democratic policies and were able to convince American voters that change was needed.

Mix in a bad economy and record high unemployment, a rough period during which they weren't the ones at the helm, and you have a recipe for success.

10 things Republicans must do in 10 weeks

According to midterm exit polls, 88 percent of voters found economic conditions to be not good or poor, and 86 percent said they were very worried or somewhat worried about the economy.

Republican wins, some say, came from a perception of the party as being a unified force, all on the same legislative page.

Looking ahead to President Obama's year

"Almost nobody broke ranks, and they kept up their attacks on Democrats," historian and CNN.com Opinion columnist Julian Zelizer wrote. "Republicans have remained united in their opposition to President Obama's policies as well, charging that he has undertaken a socialistic experiment by expanding government and criticizing the administration for being left of center."

The Tea Party movement was another factor that helped Republicans.

Its rise added a political element to the election, boosting little-known Republicans into winners' spots in many swing districts and Democratic-leaning states.

"I don't think there's any question that if it were not for the Tea Party, the Republican margin in the House of Representatives would not be as high as it's going to be," CNN senior political analyst David Gergen said after the election results came in. "They gave a lot of enthusiasm and fuel to the Republican Party."

"I think Time magazine got it wrong when they named their person of the year (Facebook founder Mark Zuckerberg). I think the person of the year should have been the Tea Party voter," he said. "The Tea Party was able to elect Republicans to office and put a check on the scope and size of power inside Washington."

Time did name the Tea Party a runner-up to Zuckerberg.

In a year when the economy was issue No. 1, observers argue, Republicans didn't need to focus campaigns on hot-button issues such as same-sex marriage and abortion, which normally rev up its base.

The GOP base was already energized and ready to spend whatever political capital it took to win back the hearts and minds of Americans struggling to make ends meet.

Simply put, the Republican sweep of Congress had less to do with support for the GOP and more with voters wanting change, polls found.

A CNN poll released in November indicated that only one in six people saw the election results as a mandate for the GOP.

"Republicans should not be taking a victory lap, and they should not be interpreting this as a mandate for all the Republican policies," Christie said. "It's just the American people wanting to but a brake on the Democrats and allow the Republicans an opportunity to limit the size and scope of government."

Another poll conducted by the Pew Research Center for the People & the Press found that 48 percent of the public was happy that the GOP won control of the House, 34 percent were unhappy, and 18 percent didn't know or refused to answer.

Read more on the poll

The number of Americans happy with the election results was 12 points lower than the six in 10 who felt the same after the 2006 midterm elections, when Democrats won control of both the House and the Senate.

The poll also found that Americans were divided on the Republicans' plans and policies for the future, with 41 percent approving and 37 percent saying they disapprove.

Obama and Democratic leaders consistently tried to paint Republicans as obstructionists -- "the party of 'no' " -- highlighting their frequent filibustering of bills in the Senate and general unwillingness to work in a bipartisan manner. Public opinion this year found a desire for both parties to work together to get things done.

But a lot changed as Congress entered its lame-duck session.

The tax cut extension bill brokered by Obama and key Republicans showed that the two parties could work together and find solutions. But not everyone was happy. Liberals within the Democratic ranks found themselves at odds with their leader and railed against what they saw as a bill that hurt the middle class while helping the rich get richer.

That legislative item, along with a $1.1 trillion spending bill, also showed the cracks beginning to develop between Republicans and Tea Party groups.

Groups like the Tea Party Express and Tea Party Patriots blasted both pieces of legislation, saying they were too expensive, were deficit-unfriendly and went against Republicans' fiscal conservative pledges.

Tea Party leaders were breathing fire in particular over the spending bill, which was filled with more than $8 billion in earmarks from members of both parties.

Kremer's group backed GOP candidates in the 2010 election who promised to root out wasteful pork-barrel spending. She now warns that any Republican who supported the measure risks a primary challenge come 2012.

Christie said there is no doubt in his mind that if Republicans go back to their old ways, "which was bloated appropriations bills and far too much spending, I think the Tea Party folks would just be as inclined to throw the Republicans out."

It is vital that Republicans demonstrate to the American people why they should be trusted with the "keys to the car," Christie added.

"I believe in the first couple of months that Republicans will hold true to the promises they made to voters and 'this is why we should be back in the car and have the keys,' " he said. "I think their policies will not only take hold but will prove very popular with the American people."

It is important, then, that the party outline new solutions and not just the mantra of "no."

Republicans "need to be the party of ideas," said Mark Preston, CNN senior political editor. "They just can't be the party of obstruction ... but to also offer solutions to some of the problems that are facing the nation."

Another issue that Republicans will need to look out for, observers say, is freshman members of Congress who face a learning curve.

"The first thing new members discover is how little they know about the complex issues they are going to be dealing with or the operating procedures of the House and Senate," Ed Rollins, a GOP strategist and CNN senior political contributor, wrote."What many don't realize is that what they offered as a sound-bite response in a campaign moment has become a commitment to untangle complex issues with no easy solutions."

But freshman legislators can also be a good thing, offering fresh ideas and new messaging strategies to appeal to Americans dismayed with Congress.

"The importance of some of these new members is that they are doctors, lawyers, nurses and ordinary Americans who are now in a place to lead the country and move us away from that entrenched political class that we've seen," Christie said. "So it's going to be a nice breath of fresh air in the Congress."

The year 2010 started on a somber note with the Haiti earthquake, and the BP oil spill lasted for months. But the year also had its share of triumphs.
A final farewell

CNN takes a closer look at the celebrities who passed away in 2010, including actors Tony Curtis, Dennis Hopper, Lena Horne and Leslie Nielsen.
Tablets take off in 2010

Outside of the techno-geek community, few had even heard of tablet computers when 2010 started. But in late January, that all changed.
New scandals, old faces

Was it 2006 all over again? Mel Gibson, Charlie Sheen, Lindsay Lohan and Paris Hilton made headlines this year -- and for all the wrong reasons.