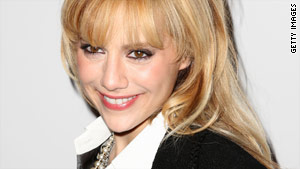 Brittany Murphy's husband and mother join Larry King on Friday night to discuss their loss and remember the life of the actress. Tune in Friday night, 9 ET on "Larry King Live."

The 32-year-old actress was found dead in her Hollywood Hills, California, home December 20.

The short statement issued by the coroner's office Thursday did not list the drugs involved, but assistant chief Ed Winter told CNN no illegal drugs were found in Murphy's system.

The full autopsy report would be available within two weeks, the coroner's office said.

The primary cause of death was "community acquired pneumonia," but drugs found by the toxicology screening were believed to "play a role in her death," said coroner's spokesman Craig Harvey. "They just were not the primary cause, so they figured into the cause of death, so that's why it's an accidental death."

Murphy's husband, British screenwriter Simon Monjack, has told People magazine the actress had "laryngitis and flu-like symptoms" at the time of her death.

"She was on an antibiotic and was taking cough medicine," he said.

Murphy was pronounced dead at Cedars-Sinai Medical Center in Los Angeles, California, after she was rushed there in the early morning hours of Sunday, December 20.

The often bubbly, free-spirited actress appeared in films such as "Clueless," "8 Mile," "Don't Say a Word" and "Girl, Interrupted." She also lent her voice to animated works, including the movie "Happy Feet" -- in which she also sang -- and a regular voice role on the animated TV series "King of the Hill."

Murphy was best-known for her work in a string of comedies earlier this decade, including playing lead roles in "Uptown Girls" alongside fellow Georgia native Dakota Fanning and "Little Black Book" with Holly Hunter and Kathy Bates.

She is survived by her husband.

CNN's Jim Roope and Brittany Kaplan contributed to this report.